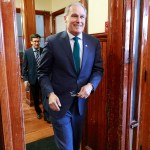 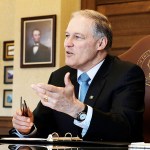 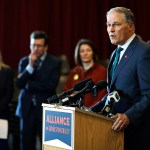 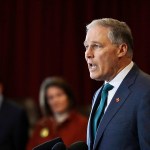 Yet another Democrat has entered the 2020 presidential race. Let’s give a warm welcome to Washington’s Governor, Jay Inslee, who promises to focus on climate change should he beat Trump! Learn more about him here.

Washington state Governor Jay Inslee, 68, announced that he’s running for president in 2020. The governor joins an already crowded race, with 12 prominent Democrats, including nine senators, vying to take down Donald Trump in the 2020 presidential election. The candidate has promised to tackle climate change and create a better world if he’s in the Oval Office. Let’s more about his proposed policies and Inslee himself:

1. He would focus on climate change if elected president. “This is a moment. This is the 11th hour to defeat climate change. It is a moment of great urgency, but it is also this incredible opportunity to seize for job creation,” he told ABC in an interview at the National Governor’s Association Winter Meeting in Washington, DC. “Mother Nature is making it break through, not me. Because Mother Nature, aggravated by climate change and carbon pollution, has burned down Paradise, California, drowned Houston, and is now drowning Miami Beach. This wake-up call is being delivered, and people are responding to it.”

2. He’s held elected office since 1989. Inslee has been in elected office in some capacity for the last three decades. He was first elected to the Washington state House of Representatives in 1989, then elected to the US House in 1992. After a string of losses, he was elected back into Congress in 1998. He held that position until 2012, when he became governor of Washington state. Now, he is eyeing the White House.

3. He confronted Trump after the Parkland shooting. During a 2018 event, Inslee called out the president after he proposed arming teachers to combat school shootings. “I just suggest we need a little less tweeting here, a little more listening,” he said at the time. He doubled down on his criticism in an interview with ABC News, saying, “He’s a fearful, little man — he’s a pessimist who doesn’t think we can tame this. So he’s running away from it. The best way to defeat him is to provide a character, an example of the American character, that is resonant with who we are as Americans: optimistic, future-oriented, open to everybody to be who you are. I’ve already confronted him at the White House last year. So I’m comfortable in that confrontation.”

4. He sued Trump in 2017 AND 2018 AND 2019. Inslee filed a lawsuit against Trump, the Department of Homeland Security, and several high-ranking Trump administration members in January in 2017 after the president announced his proposal to ban travel and immigration from seven Muslim majority countries. “We are a country based on the rule of law and in a courtroom it is not the loudest voice that prevails, it’s the Constitution,” Washington’s Attorney General, Bob Ferguson, said at the time. “At the end of the day, either you’re abiding by the Constitution or you are not. And in our view, the president is not adhering to the Constitution when it comes to this executive action.”

Inslee’s Washington, along with over a dozen other states, announced plans in June 2018 to sue the Trump administration over its “zero tolerance” policy of separating immigrant children from their parents at the US-Mexico border. The lawsuit challenged the constitutionality of Trump’s policy, as well as argued that the policy was discriminatory, as it only targeted the southern border, not other ports of entry.

And in February 2019, Washington state announced that they intend to sue Trump over his new ruling to target Planned Parenthood — cutting federal family planning funds under the Title X program from clinics that provide abortions or refer patients to clinics where they can get abortions.

VIDEO: This is our moment, our climate, our mission — together, we can defeat climate change. That's why I'm running for president. Join #OurClimateMoment today https://t.co/zg8ILGyk0Z pic.twitter.com/pUZVxyzfc5

5. He will run the only presidential campaign based on the west coast. Of the 20+ people running for president this cycle, Inslee is the only candidate to headquarter this far from Washington, DC. His base of operations will be in Seattle.