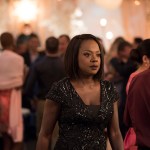 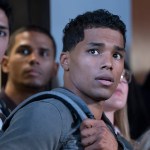 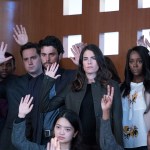 Who saw that coming? After a roller coaster of an episode, the ‘HTGAWM’ season 5 finale ended with one of the Keating 4 go missing in the blink of an eye!

The final moments of the How To Get Away With Murder season 5 finale set up one hell of a season 6. Laurel had just thanked Annalise for everything she’d done for her and Christopher, and they head home together. Annalise got a call from Tegan and took her eye off Laurel. A moment later, Annalise turned and Laurel was gone. She just disappeared, the kidnapping went completely unnoticed by Annalise and everyone else. Annalise immediately called Frank to go check on Christopher.

While the baby monitor showed a sleeping Christopher, the video was on a loop. When Frank reached the nursery, Christopher was gone. Both Laurel and Christopher are missing!

Let’s back up a bit, so we can get up to speed on what got us to this moment. We found out that Laurel’s brother, Xavier, went to Miller and offered to buy his DA campaign. Miller couldn’t resist so he agreed. Xavier also paid Gladden to say that Nate Sr. stabbed her.

Frank found out about Xavier paying off Gladden. He told Annalise that Miller was innocent. He begged for Nate Sr.’s transfer to happen at night so the shooting wouldn’t happen. Xavier threatened to kill Bonnie if Miller messed up again. “Nate can’t know,” Annalise said. Knowing all of this, Frank went to Gladden and threatened to hurt her family if she didn’t tell Bonnie Miller ordered the hit on Nate Sr.

Laurel and Annalise confronted Xavier about the deal with Miller and Sandrine. Annalise went off on Xavier, calling him a “disappointment.” She got under his skin and made him look incredibly weak. “You lost this round, boo,” Annalise said. Annalise was well aware that Xavier was working with the governor to bring her down. Xavier didn’t make a scene, but you could feel the rage boiling underneath. “Just let me go,” Laurel told her brother. “You and dad.” Xavier called the governor after Annalise and Laurel left, and they decided to move on with their “plan B.”

Also during the episode, Laurel asked Connor and Oliver to be Christopher’s legal guardians if anything happened to her. Michaela’s birth father was found, and Annalise knew him. Telesco was fired. When Michaela went to tell Gabriel the good news, they kissed! Nate was also arrested, but he was released. When he got out, Bonnie was there to tell him what Gladden told her. After the governor implicated Emmett in the deaths of Miller and Nate Sr., Tegan called Annalise. While she was talking to Annalise, Emmett was dying upstairs after taking a sip of a poisoned drink. Emmett had asked Tegan to have a drink with him. One slight change saved her life. This all went down at the same time Laurel and Christopher went missing!