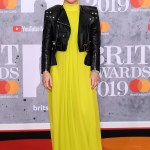 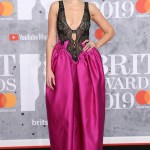 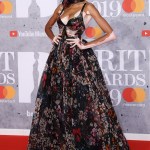 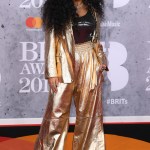 Pink in yellow! She is at the BRIT Awards accepting a lifetime achievement award, and she looked amazing as she arrived on the red carpet. See pics of her outfit below!

Pink, 39, knows how to make a style statement! Hosted by comedian Jack Whitehall, the 2019 BRIT Awards took place on Feb. 20 at the O2 Arena in London, England. It’s a big show! Pink looked radiant on the red carpet in a bright yellow dress by Cushnie. The gown went to the floor and had a high neck — she looked like a ray of sunshine! But in typical Pink fashion, she added some rock and roll by pairing it with a black leather jacket! Pink wore a Djula earring and Le Vian bracelets and ring. She wore a nude lip, slightly smokey eye makeup and her hair in a chic pompadour.

Pink received this year’s “outstanding contribution to music award” at the BRITs. Pink’s first solo single “There You Go” was released in 2000, and nearly 20 years later, she is still dropping hits. On February 20, she released her newest single called “Walk Me Home.” Pink has released seven albums, including a greatest hits album. She has sold over 60 million album units and 75 million singles! WOAH! She has had quite a career — amazing!

Back on our side of the pond, Pink just received a star on the Hollywood Walk Of Fame on Feb. 5, 2019. Talk show host Ellen DeGeneres presented the star to Pink, saying, “If you have ever seen her in concert, she’s the most amazing performer. But, at the same time, she’s the most grounded person. She can turn it on and be amazing, and then just be a regular person.” Congrats to Pink on all of her recent achievements!