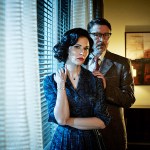 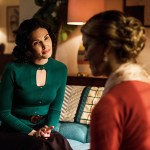 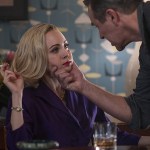 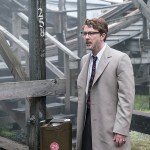 The Feb. 12 episode of ‘Project Blue Book’ was a game-changer for Mimi and Allen. HL spoke EXCLUSIVELY with Laura Mennell about how this shift changes their relationship, what’s coming up, and more.

After episodes of being in the dark on Project Blue Book, Mimi Hynek is officially up to speed on what her husband, Dr. J.Allen Hynek, has been tirelessly investigating for the U.S. government: potential UFO sightings. Mimi decided to take charge and wanted no more secrets floating around between her and her husband. “What I loved about that episode was there’s a change there, right? Suddenly she’s feeling more empathetic and feeling more understanding towards what her husband’s going through,” Laura told HollywoodLife. “So she decides to stands her ground. She doesn’t want to be going backwards. She wants to be part of things and not in the dark, but she approaches things in a more empathetic way. It’s nice that Allen decides to let her in. Really, she’s the only one he lets in with this secret of this new mysterious object, which is going to build into more of a story as the season goes along, but I love that change. I love that he says that they are now going to be a team. So going forward that is the hope. Will that happen? I don’t think things can be tied up that perfectly in a little bow just yet. We’ll see where things go. I think there’s still a little work to be done with their relationship, but they’re working on it. They’re trying. That’s a big step.” She also teased: “Things are definitely going to get deeper and stronger than they are now, believe it or not, but that doesn’t necessarily mean for the better. I think things will get confusing and complicated and messy and dangerous.”

This major step opens up a lot for the character of Mimi. The show is based on the true, top-secret investigations into UFOs and related phenomena by the U.S. Air Force in the 1950s and 1960s. The real Mimi Hynek was a huge help in her husband’s work as a ufologist. “She did become an editor for his writing with ufology, and she was also a part of the interview process in terms of cases that came in, to a certain extent,” Laura revealed. “So it would be fun to see where that leads. I think that maybe that opens the door a little bit for that at some point but we will have to see.”

But just how is Mimi going to handle what her husband has been investigating? “It’s not an easy thing, wrapping your head around that your husband starts to work for the U.S. government, for the Air Force in a top secret project that happens to be dealing with UFOs, something that you thought would be really science fiction, like something in your son’s comic books,” Laura said. “It doesn’t seem real. It’s a tough thing to grasp, but I think Mimi has had no choice but really to let it sink in and really accept it, especially with all the crazy stuff that’s been going on around the household. Her main priority is really to protect her family. Mimi’s definitely starting to become more and more outspoken so she’s going to become vocal about it. We’ll see what happens.”

But Mimi and Allen’s relationship isn’t the only exciting dynamic in Mimi’s life. There’s Susie, a friend of Mimi’s who is actually a secret Russian spy. “Part of the reason why I was so excited to get to play this role in the first place was I thought this relationship was really interesting, specifically because Susie in so many ways is really the catalyst for a lot of change within Mimi becoming, sort of drawing her out of her shell and helping her to get out of her comfort zone and become a stronger woman,” Laura continued. Project Blue Book, which was renewed for a second season, airs Tuesdays at 10 p.m. on History.