The polar vortex has claimed Bella Hadid’s hair as its latest victim. The model showed off how the frigid NYC temps caused her locks literally freeze, which later thawed on a date with The Weeknd.

The frigid polar vortex has taught model Bella Hadid a very big lesson in exposing wet hair to frozen temps. The busy model had a big day ahead of her in New York City and started bright and early on Feb. 1. That included a nice warm shower as it was about ten degrees outside at the time she had to leave the house at 6am. Her hair wasn’t completely dry when she stepped outside and into an awaiting car as her luscious brunette locks turned into mini icicles as a result. The 22-year-old beauty didn’t want others to suffer the same fate so she shared a pic of frozen hair via her Instagram stories to warn fans. CLICK HERE TO SEE BELLA’S FROZEN HAIR.

Bella showed off her dark hair with strands covered in light white ice as her first IG story of the day. It showed a close up shot of the locks that made it look like she had light grey streaks in her mane. “Warning: do not 6am shower. hair will freeze,” she captioned the pic, so hopefully some of her followers can learn a lesson. Fortunately ice melts so her locks probably weren’t too damaged.

Even if any of her natural hair did break off from the ice, by her next series of IG stories she was in a warm white bathrobe already in a makeup chair with a glam squad working on her. She showed herself getting long extensions put on and she ended up with a gorgeous high pony, the type that Ariana Grande has made so famous. Bella also had on full makeup and it appeared she was being prepped for a photo shoot. 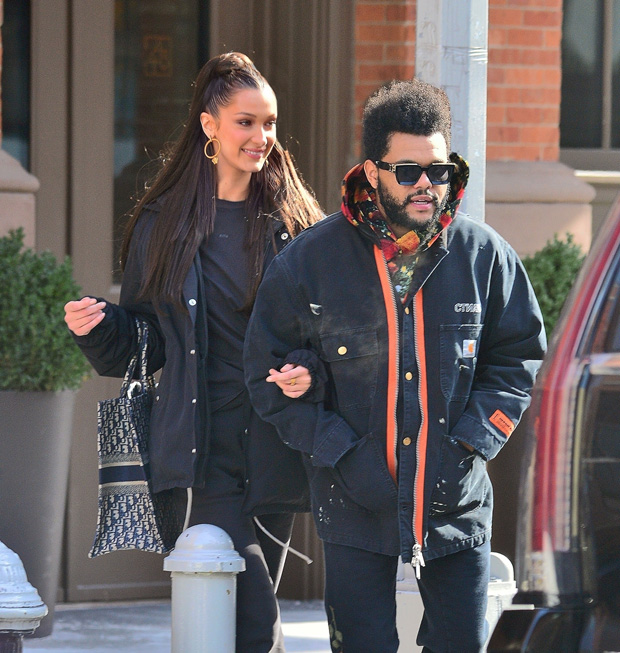 Bella’s boyfriend The Weeknd, 28, got to see his lady’s full glam as they were photographed later in the day where she had her arm snugly around his to help stay warm. Her long high pony looked super glossy in the NYC sun and she had a big smile on her beautiful  made-up glam face. It appeared she finished up whatever project she was working on and was loving her dazzling look, as the rest of her was super casual. She she wore a navy sweater, track pants, white sneakers and a navy jacket. Stay warm you two!