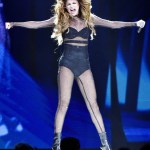 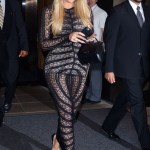 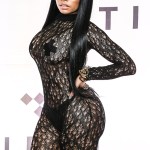 Full-body tights aren’t just remnants from the age of Jazzercise! Kim Kardashian and more trendy celebrities prove that head-to-toe tights are making a comeback and are surprisingly versatile.

Full-body tights can conjure images of unitards and other similar pieces for ’80s dance rehearsals, but once again, Hollywood has proved the impossible. Kim Kardashian, 38, showed up at John Legend’s 40th birthday party in a lace bodysuit by Alexander Wang on Jan. 12 (below). The sheer detailing ran from head to toe, as even Kim’s feet were covered in lace, only to be disrupted by chic keyholes! We had a flashback to 2015, when sister Khloe, 34, wore a similar black lace piece for an outing in New York City — see the look in HollywoodLife’s gallery above!

Bella Hadid, 22, is another excellent case of maximizing full-body tights’ potential for glamour. The supermodel arrived at the Harper’s Bazaar ICONS party on Sept. 8 not in a dress, but in a nude leotard that covered her matching corset top and thong. Bugler’s creative director Casey Cadwallader can be thanked for its tight fit, given that he custom made the piece for Bella!

Even without creative directors in our disposal, or even a seamstress, nude leotards are luckily in great supply and can be given that “custom made” touch by adding embellishments like jewels and feathers. This is the exact strategy we saw during Jennifer Lopez’s Las Vegas residency, All I Have, that ran from Jan. 2016 to Sept. 2018! JLo has an affinity for the nude bodysuit, as she often took the stage in such pieces that were each treated to a generous dose of bedazzling. It’s a trademark look of JLo’s, as she also wore a nude unitard to perform at the 39th annual American Music Awards in Los Angeles, as you can see in our pictures above.

Check out even more celebrities rocking full-body tights in our roundup above! Stars like Selena Gomez, 26, and Nicki Minaj, 36, show that full-body tights are a popular choice for concert costumes, but then there’s Khloe, who demonstrates the piece can also be worn for an #ootd.