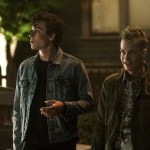 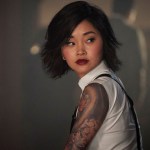 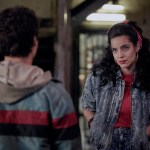 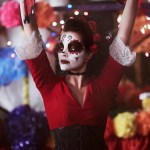 ‘Deadly Class’ is the new show you must watch. HL spoke EXCLUSIVELY with stars Benjamin Wadsworth and María Gabriela de Faría about what to expect with these teenage assassins!

School is officially in session. Deadly Class premieres Jan. 16 at 10 p.m. on SYFY. The series is based on the popular graphic novels and stars incredible young stars like Benjamin Wadsworth, María Gabriela de Faría, Lana Condor, Liam James, Luke Tennie, and more. Deadly Class is a coming-of-age story that focus on a homeless, disillusioned teen named Marcus, who is recruited to a secret academy for the Deadly Arts called King’s Dominion. At King’s Dominion, he tries to find his purpose and a family among an unlikely group of misfits.

HollywoodLife sat down EXCLUSIVELY with Benjamin, who plays Marcus, and María, who plays Maria, at the show’s press junket on Jan. 14. María opened up to HollywoodLife about taking on the beloved graphic novels in the form of a TV show. “The comics are a different medium, so with the TV show we get to take what is in the comics and expand on it,” she said. “We are able to tell more stories and explore more of the characters. We go a little more deep into the characters’ lives, which I think is even better.”

As far as the romance department is concerned, you can definitely expect the show to explore relationships over the course of the first season. “There is a love triangle [between Maria, Marcus, and Saya], and we definitely stick very close to the comics,” Benjamin teased. María also noted, “Love is the driving force for everyone, I would say. So it is a very important part.” Benjamin added that this includes “ideas of unrequited love.” María followed up on that with, “Because at King’s Dominion, you can’t have personal relationships. You can’t have friends. You can’t have a partner. So all of that is amplified by being assassins in training.”

The leader of King’s Dominion is the tough-as-nails Master Lin, played by Benedict Wong. You’re going to see a lot more of him than you do in the comics. “Master Lin is going to be a force to be reckoned with in the series!” Benjamin revealed. “In the comics, he is not there a lot and just there to push plot buttons, but he is a big character in this… He is solemn and dogmatic and everything that we fear!” María admitted that she thinks “audiences are going to hate him at first — at least I did! ” Deadly Class will air Wednesdays at 10 p.m. on SYFY.