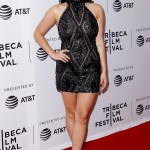 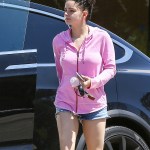 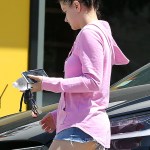 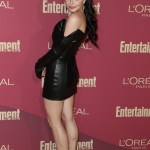 Ariel Winter is all about being body positive and loves flaunting her legs. We’ve got all of the times she showed off her toned limbs in short shorts, mini dresses and more.

No matter what the season is in LA, Ariel Winter loves to show off her long toned legs in body-baring outfits. Even though it was a cold and rainy day on Jan. 13, the 20-year-old actress flaunted her gams when she wore a black and white polka dot mini dress under a black peacoat and matching thigh-high boots while taking a walk through Sherman Oaks. On Jan. 6 she attended Golden Globes parties in a black lace lingerie-style dress that had a huge thigh-high slit. The Modern Family actress has recently lost over 10 pounds and the difference is noticeable in her figure-hugging looks.

Since her ABC sitcom has been an awards show staple for the past decade, Ariel has had plenty of red carpets to hit and never fails to deliver in style. She favors little black dresses that show plenty of leg. Even at events like the network’s upfronts, the starlet dresses to impress by showing off her toned pins. See all the pics of Ariel in short shorts and mini dresses while flaunting her legs here.

Ariel’s favorite season is summer, where she’s able to wear booty shorts to her heart’s content without getting chilly. The starlet has never been one for modesty and loves flaunting Daisy Dukes that are the shortest of any star in Hollywood. She frequently shares the pics on her social media accounts which has sadly lead to some people shaming her for showing off her body that she’s so proud of.

“I really had to stand up and make it a point to fight back against people who were not only body shaming, but also slut-shaming…taking aim at people that weren’t doing anything wrong and making comments that were so harmful and distressing for absolutely no purpose,” she told Self magazine in Jan. of 2017 when it came to Internet trolls. Ariel told Yahoo Style in April of that year, “If people don’t like it, unfollow me. If you’re so offended, why do you look at it? Don’t take the time to hate on me. Just unfollow me and follow someone who covers every part of their body to their toes. I don’t care.”