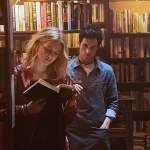 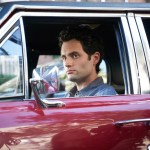 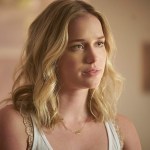 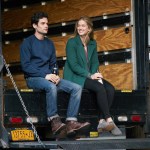 Absolutely everyone has been tuning into ‘You’ since it hit Netflix in Dec. 2018 – find out what you need to know about the show’s lead, Elizabeth Lail!

Elizabeth Lail, 26, plays graduate student writer Guinevere Beck on new Netflix show You who falls victim to 32-year-old Penn Badgely’s character Joe Goldberg and his manipulative, treacherous ways. Read on for five things you should know about the newcomer actress!

1. Before her role on You, she played Princess Anna on ABC’s Once Upon A Time. “I’ve always wanted to be a Disney princess, and here I am,” Elizabeth said for an interview while filming the show in 2014. She then acted in Dead of Summer as Amy Hughes in 2016, and had a couple other guest roles before landing You.

2. She doesn’t think Joe is all bad. While many who have watched You are utterly horrified by Joe’s actions, Elizabeth found some way to connect with his character. “There’s possibly some kind of love going on between the two [Joe and Beck],” Elizabeth said at the BUILD series. “Though it is like, obsessive, and destructive and awful in this day in age, you know, everyday we’re all attempting to love the best we can. We’re often not succeeding at that. Joe is like everyone else in that way.” Well, it’s good that Elizabeth found some good in Joe, since she had to act out being in love with him! “They make a good match,” she said later in the same interview, and after Penn gave her a look, she added, “In some ways!”

3. You is based off a novel of the same name. The television show’s source material comes from a series by author Caroline Kepnes, 42. There’s a second book, aptly-titled Hidden Bodies.

4. She isn’t big on social media, unlike her character, Beck. In an EXCLUSIVE interview with HollywoodLife in Sept. 2018, Elizabeth said she’s “not that connected” to social media. “I don’t feel like I’m giving too much of myself on it or that it’s going to be a part of my life forever,” she said. “I’m not that attached to it, and that’s remained about the same.”

5. Elizabeth is friends with You cast-mates in real life. She has posted pictures on her Instagram with Penn, Nicole Kang, 27, who plays Lynn, and Kathryn Gallagher, 25, who portrays Annika. Elizabeth spent New Year’s Eve with Nicole and Kathryn!