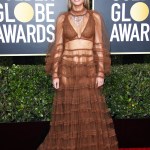 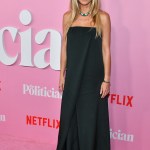 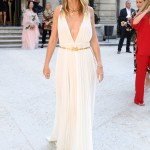 Gwyneth Paltrow rarely posts pics of her kids, and it’s always a surprise to see how much they’ve grown! Her daughter, Apple Martin, is now 14 years old, and it’s astounding just how much she looks like her famous mom. Gwyneth posted the sweetest photo to Instagram on January 8 that shows her hanging out with her lookalike daughter and one of her friends. In the pic, which you can see in full above, Apple is sweetly kissing the Avengers: Infinity War star on the cheek. If you didn’t know that you were looking at Apple, you could easily mistake her side profile for her mother’s.

It’s crazy! Now, a lot of teenagers wouldn’t be too pleased to be compared to their moms, but when you have one that looks like Gwyneth, it’s probably a welcomed comparison! Apple looks a lot like her famous dad, Coldplay frontman Chris Martin, as well. Ditto to her younger brother, 12-year-old Moses Martin. They sure made cute kids! The exes have done a good job of keeping their children out of the spotlight over the years, but every once in a while, they cave into proud parent mode and post a pic or two. Gwyneth did that back in September, as well, when she shared a sweet selfie starring beautiful Apple on National Daughters Day. She captioned it, “Happy #nationaldaughtersday Apple Martin, it’s like i conjured you from a dream, you make my life.” Aww!

More recently, Apple was seen at her mom’s wedding to Brad Falchuk. She and Brad’s daughter, Isabella, were bridesmaids! The two girls wore matching strapless Monique Lhuillier dresses with tulle skirts at the wedding, and looked divine. We hope to see more pics of Apple and her siblings in the future!