Madonna, 60, looked seriously bootylicious in a new video of her performing at the Stonewall Inn, an iconic NYC gay club, on Dec. 31. In the clip, the singer looked way curvier than usual, causing fans to accuse her of getting work done on her derriere. We showed the clip and the before and after pics to three top plastic surgeons and they all agreed that she’s added “volume” to her rear. So, how did she suddenly get so much junk in her trunk?

“Madonna appears to have developed a massive booty,” plastic surgeon, Dr. Anthony Youn, told HollywoodLife EXCLUSIVELY. “I believe that mostly likely this huge change is due to buttock inserts in her pants, but if that’s not the case, then a set of buttock implants appears to be the next most likely explanation.” Dr. McCoy Moretz, also believed Madonna may have had some plastic surgery done on her booty. “In my opinion, she has gotten butt implants and not fat injections because there is just so much volume there,” the Beverly Hills plastic surgeon explained to HollywoodLife EXCLUSIVELY. “It would take a whole lot of fat to get that sort of volume, and by looking at her body I don’t think there’s that much fat that they could have taken out with liposuction to give her that kind of volume. From what I can see, it looks like she has 800 to 1000 cc’s and that is a lot of volume. It takes a lot of fat on an individual to be able to liposuction enough off to really blow the buttocks up that much and it does not appear that Madonna would have had enough fat on her body to create that volume, so that’s why I believe she opted for the implant.”

Unfortunately, if Madonna did get implants, there may be a little cause for concern, according to the doctors. “I do not recommend buttock implants on anyone, whether they are age 60 or younger because the risk of infection is high,” Dr. Youn says. “Also, sitting on them day in and day out can predispose you to malposition, where the implants rotate out of place.” Dr. Moretz also says that he doesn’t believe butt implants are “reasonably safe,” and even admits he doesn’t know of many surgeons who do them “because they are so problematic and complication-prone.” Yikes, talk about paying a high price for a bigger butt! 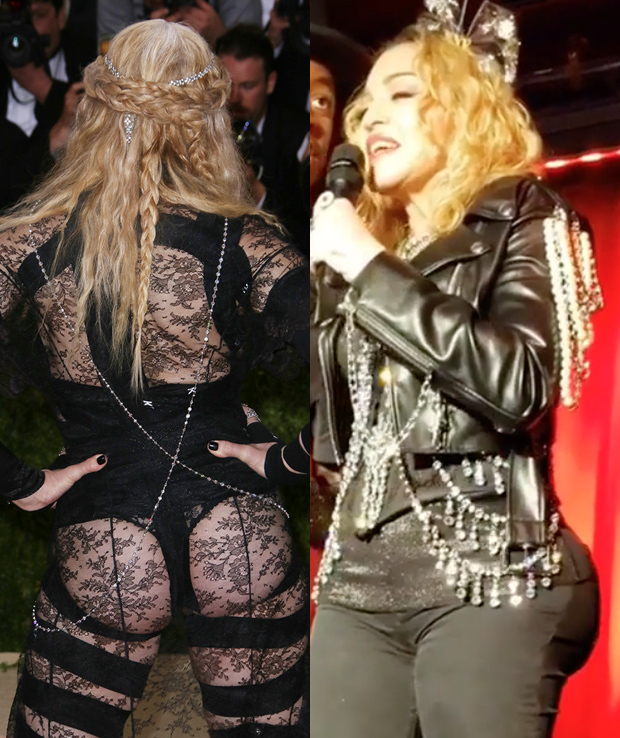 Before you get too worried about Madonna, though, it’s important to note that she may have taken a safer route to boosting her backside. , “While the pictures at the Stonewall Inn have made quite the news on the Internet, I am not convinced that the Queen of Pop has had her bum renovated,” New York-based plastic surgeon and liposuction specialist, Dr. Ryan Neinstein, explained to HollywoodLife EXCLUSIVELY. “Most modern buttock enhancement surgeries would not give such a pronounced upper tush projection. The most common way we sculpt the butt these days is non-surgically with emsculpt, a non-surgical device that delivers the equivalent of 20,000 squats per session. Recent trends amongst American surgeons are to move away from injection in the buttock of any material as the results can be distorted and unpredictable. Furthermore, the long term aging of the injections can give an awkward looking tush. The most advanced and predictable method is to use energy based liposuction to sculpt around the buttock and tighten the buttock skin, then follow that with non-surgical muscle building with our emsculpt device to enhance the tush from the inside out for a natural aesthetic result.”
We’re sure hoping that Madonna chose the safest option — we’d hate to see our favorite Material Girl suffer in any way!
Articles Trending Now