It’s been a decade since Miley Cyrus and Liam Hemsworth first met on the set of ‘The Last Song’, and the couple paid homage to the film in a photo from their wedding day on December 23! See the sweet snap!

Miley Cyrus, 26, and Liam Hemsworth, 28, are married, and one of their first photos after “I do” looks like a page right out of a Nicholas Sparks book. Oh, wait, it is? Well, not quite. But, the newlyweds gave a nod to The Last Song — the 2010 film where they met in Georgia for the first time — in a sweet photo from their wedding day on December 23. “10 years later…..,” Miley captioned a photo with Liam from their nuptials, clearly referencing the milestone from when they had met on set of the film.

In the photo, Miley and Liam held each other close as he nuzzled his head in her neck. The actor held his hand on her off-the-shoulder white dress and gripped her hair tightly. The photo gave many fans major nostalgia after they noticed it looked quite similar to the scene in The Last Song, where their characters (Ronnie and Will) share a kiss on the beach. So, we obviously had to compare the photos to satisfy our nostalgic beating hearts. Take a look at Miley and Liam’s wedding photo, alongside their kissing scene from the movie, below!

As previously mentioned, the couple first met on the set of The Last Song in 2009 and began dating. Miley, a young veteran on the acting scene, was just 17-year-old at the time, while Liam, a newcomer to Hollywood, was 19. They would eventually get engaged in 2012, only to call it off the following year. For years after their split, Miley and Liam were broken up. They would even spark romance rumors with other celebs. Then, in 2015, rumors began to swirl that the two had rekindled their friendship, and then their romance. Miley and Liam were officially back together over the 2016 New Year’s holiday, with the actress/singer later confirming their engagement was officially back on. And now, they’re married! 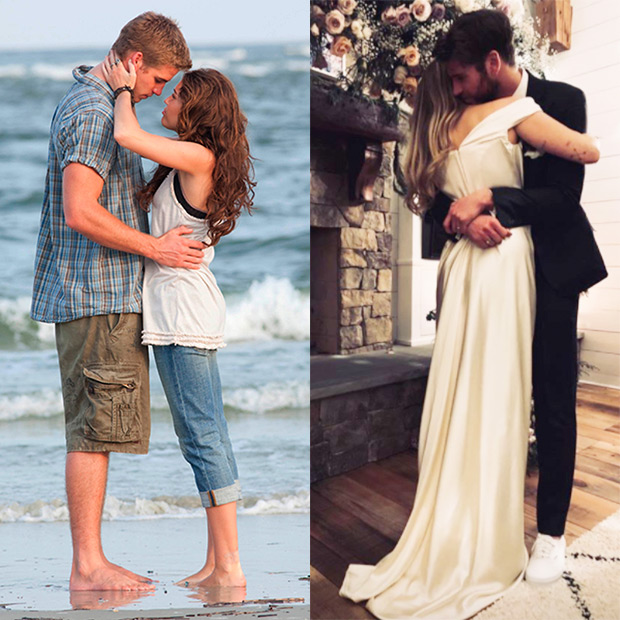 Miley and Liam tied the knot in a small, intimate ceremony at a Franklin, Tennessee home the Cyrus family owns. They said “I do” in front of close family and friends including Miley’s mother Tish and father, Billy Ray. Miley’s sisters Noah and Brandi, as well as Liam’s brothers Chris and Luke were also in attendance, reports claim.