After news broke that Kristen Stewart and her longterm girlfriend, model Stella Maxwell, split last month, she was spotted out and about with a possible new love interest — Sara Dinkin! They were first spotted together on a walk with their dogs just days ago, and now new pictures have emerged of the pair, all smiles, while shopping and grabbing a bite in West Hollywood. Kristen looked stylish and casual in Adidas, black pants and a plain white tee, while Sara rocked an all-white look with her hair pulled back in a ponytail.

While it’s unclear why Kristen and Stella ended their relationship, some are surmising that distance and time were factors. Kristen has been busy filming the Elizabeth Banks-directed recreation of Charlie’s Angels, while Stella’s modeling career has taken off. The former couple were last seen together in October during a trip to Amsterdam when Kristen had a break in filming. A source told E! News that while the two “are still in touch,'” they “decided it was best to see other people.” Adding, “They started to disagree on things and it stopped being fun. Kristen went to Germany to film and they realized that the relationship had run its course and they needed a change.” 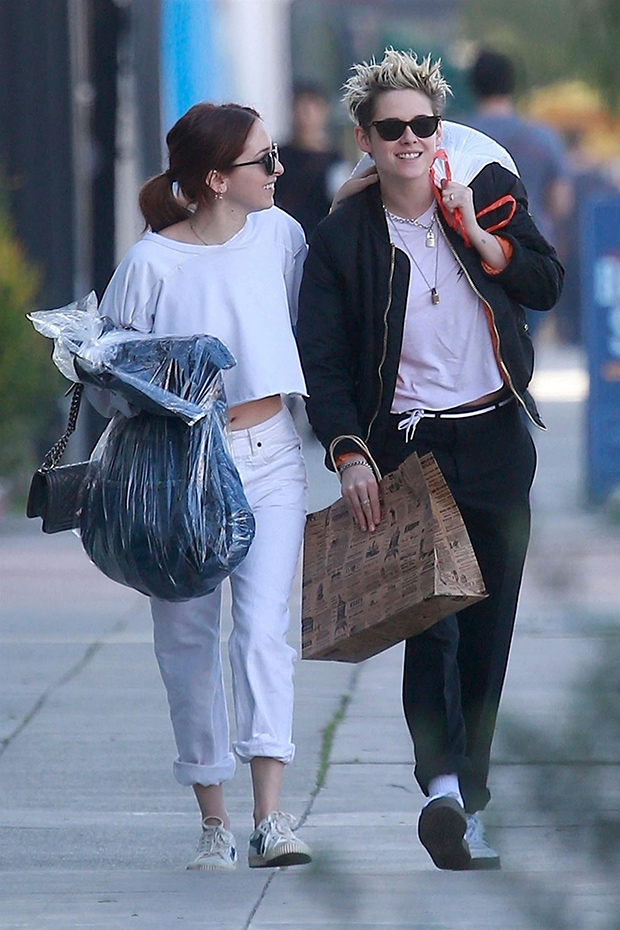 Dinkin, who is a stylist to stars like Jessica Szhor and Nico Tortorella, and Kristen were first spotted together earlier in the week, holding hands while grabbing a bite to eat. This latest outing in West Hollywood has been the third time they’ve been spotted out together this week, so things seem to be serious! During their shopping trip, Sara looked smitten with Kristen as she carried some dry cleaning, and Kristen had a bag of food and what looks like a trash bag over her shoulder. We’re going to keep an eye on these two, they look so happy!