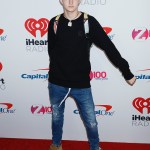 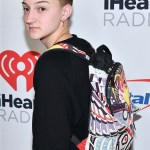 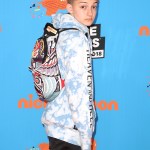 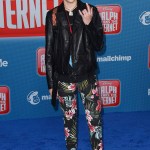 Backpack Kid is living large these days! Since gaining viral stardom thanks to creating the floss, he’s got a brand new song & some wild stories. Catch our EXCLUSIVE interview with the internet sensation here!

BackPack Kid, aka Russell Horning, completely stole the spotlight from Katy Perry during her 2017 appearance on Saturday Night Live, when he hit the stage with his now viral ‘Floss’ dance moves. The 17-year-old internet sensation has dreams that go well beyond a viral moment though, and now – he’s released a brand new music video! “Drip on Boat” dropped on Dec. 18, and the hilarious clip is giving us major Napoleon Dynamite vibes. We caught up with the famed floss creator to talk about the new visual, his friendship with Katy, and why he refuses to have a girlfriend right now. Plus, he told us about his 2019 New Year’s Eve plans, and he’s got something a little “different” up his sleeve!

You have a new single out, can you tell us about it?
RH: It’s called “Drip On Boat.” It’s out everywhere. Drip is just a term to fashion. Fashion is something that’s really important to me. It’s all about the drip! I worked with Swag Hollywood. He’s on the album as well.
What was it like making the music video for the song?
RH:  It’s a runoff of Napoleon Dynamite as me being Napoleon. It’s pretty funny. That drops when the EP Swagpack Kid does, December 19th, my birthday. I just want everybody to enjoy it. I don’t care about sales and all of that.
Your life really changed since the Katy Perry video went viral – how would you say it changed?
RH: I travel a lot. I do get noticed a lot in public, but I’m still a normal kid. I’m really, really normal.
Have you heard from Katy since your career skyrocketed?
RH: I was in her music video, and then after that we did a commercial together. She had a show in Atlanta and she brought me out on stage but after that, nothing since.
Have you thought about collaborating with her?
RH: I’m more into hip hop. She’s more of a pop singer. It wouldn’t make a lot of sense.
What are your overall goals moving forward?
RH: My overall goal is to make music with Lil Yachty.
Do you have a girlfriend?
RH: No, I don’t need one. They’re a lot of drama.
Biggest splurge purchase so far since rising to fame?
RH: This backpack necklace (gold backpack encrusted in diamonds on a gold chain). It was 10K. It’s a diamond out backpack.
What are you doing for New Year’s Eve?
RH: New Year’s Eve in New York,Times Square…I’m going to be doing a little something something. I’ve been watching the ball drop since I was 6, and I’m going to be there this year! I’m going to do a segment.