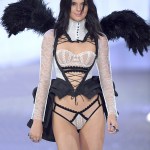 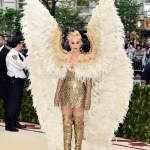 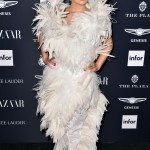 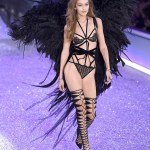 Victoria’s Secret Angels aren’t just on the runway; they’re all around it! See pics of gorgeous celebs who channel that Angel look in their own, everyday style!

How angelic! So many stars, whether they’ve realized it or not, have channeled the iconic Victoria’s Secret Angels in their red carpet looks. From feathers and fringe, to straight-up wings, it’s actually more common than you’d think! After all, who wouldn’t want to look like one of these gorgeous ladies? Take Katy Perry, for example. The “Swish Swish” singer, 34, made a grand entrance at the 2018 Met Gala with a pair of feathered wings that pretty much took up the whole red carpet. To say it was a dramatic appearance is putting it lightly!

She looked incredible, and maybe had one of the most stunning looks of the night. And that’s saying something, considering that Rihanna was walking around in a damn Pope hat! The wings and matching, golden dress, designed by Versace, were so massive that she couldn’t fit into a car. Instead, in typical Katy fashion, she rolled up (very slowly) to the Metropolitan Museum of Art in a vintage Rolls Royce convertible. She was perched in the backseat ever-so carefully as her driver inched down the street. Only the best for this angel!

We’re low-key obsessed with the dress that Christina Aguilera wore to the 2018 Harper’s Bazaar ICONS party in September. The dress was all feathers, from head to toe. She looked as if she were wrapped up in a giant angel wing! She wisely kept her hair, makeup, and accessories toned down to really put all focus on the frock — as if that weren’t possible. Please, can we get this woman on the 2019 Victoria’s Secret Fashion Show catwalk?

For more pics of stars who totally cosplayed as Victoria’s Secret Angels, like Cate Blanchett, Penelope Cruz, and Sophia Stallone, scroll through our gallery above!