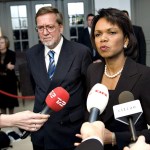 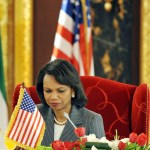 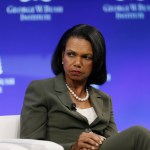 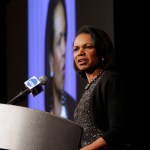 In the weirdest sports story of the day, the Cleveland Browns are reportedly interested in interviewing former Secretary of State Condoleezza Rice to be their next head coach. Really.

Update: Browns GM John Dorsey released a statement in which he said that while he has “the utmost respect and admiration for all she’s accomplished,” Condi wasn’t on the list of candidates. Condoleezza herself responded, saying “I’m not ready to coach but I would like to call a play or two next season if the Browns ideas! And at no time will I call for a ‘prevent defense.’ “ She also called for the NFL to start bringing in “women into the coaching profession as position coaches and eventually coordinators and head coaches.”

The 3-6-1 Cleveland Browns fired their head coach Hue Jackson on Oct. 29, naming Gregg Williams as the interim coach. The team’s general manager John Dorsey said he was open to hiring a woman for the role, but one of the rumored names has everyone going “WTF.” The Browns want to interview Condoleezza Rice, 64, the former Secretary of State under the George W. Bush administration, a league source told ESPN. “She is amazing person,” a Browns source told the publication. While a potential interview doesn’t mean she’ll get the job, the team is reportedly interested in talking to her about the role and seeing what she could bring to the organization. So, for those who may not know, who is Condoleezza.

She’s named after a music term. Born in Birmingham, Alabama, her mother gave her the name “Condoleezza” from the Italian “con dolcezza,” a music term that translates to “with sweetness.” The name was almost a prophecy, as Condi began practicing piano as a young girl with the goal of becoming a concert pianist. However, it seemed that her path was to take her out of the music hall and into the West Wing (note: while she didn’t turn pro, she still practices and reportedly plays with a chamber music group.)

She was the first woman to serve as National Security Adviser, and she does so until 2005. In Jan. 2005, after a senate vote of 85-13, she becomes the first African-American woman to hold the role of Secretary of State. She held that position until January 20, 2009.

Many continue to be unhappy with her role in the Iraq war. The United States invaded Iraq in 2003, when Condoleezza was the National Security Advisor. She reportedly “ignored at least two CIA memos and a personal phone call from Director George Tenet stating that the evidence behind Iraq’s supposed uranium acquisition was weak,” according to Think Progress, who dubbed her one of the “architects” of the war. While she wasn’t the only one responsible for the Iraq War, may still see her as holding some responsibility for the conflict. She withdrew from giving a commencement address at Rutgers University in 2014 after faculty and students protested.

She’s a lifetime Browns fan. Despite being born in Alabama, attending school in Denver and working in Southern California, Condi is a “lifelong browns fan,” according to ESPN. Her love for the team started when she was a young girl, as she and her father would watch the Browns games together. She has been featured in a Browns jersey in NFL commercials, and she has been spotted at some of their games. She was even seen on the field with owners Dee and Jimmy Haslam before the Browns’ Sept. 30 game against the Oakland Raiders.

…and she was once engaged to a football star. Condoleezza has never been married and she doesn’t have any children. Considering all that she’s done in her life – which we’ve only briefly touched upon here – it’s fair to say she was married to her job. However, in the 1970s, she was briefly engaged to Rick Upchurch, former wide-receiver for the Denver Broncos. She left him, reportedly, because she knew “the relationship wasn’t going to work.”