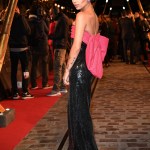 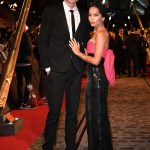 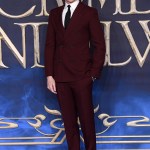 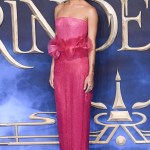 In truly magical news, Katherine Waterson is pregnant! The Fantastic Beasts: The Crimes of Grindelwald actress, 38, debuted her baby bump at the London premiere of the upcoming Harry Potter film, and she looked absolutely radiant. We’re so happy for her! Katherine surprised her fans — and apparently, some of her costars — with the wonderful news at the premiere. She posed proudly on the red carpet in a gorgeous, yellow satin Calvin Klein gown, proudly accentuating her stomach between her hands.

Adorable pics surfaced later of costars, including Ezra Miller and Alison Sudol, happily rubbing her baby bump. Katherine hasn’t actually spoken out about her pregnancy yet, and the identity of the father is unknown at this time. She’s pretty private about her personal life. The daughter of legendary actor Sam Waterston, Katherine reprising her role as Porpentina “Tina” Goldstein in the Fantastic Beasts and Where to Find Them sequel, which hits theaters on November 21. She made her acting debut in 2007’s Michael Clayton, and also starred in Alien: Covenant, Logan Lucky, and Steve Jobs.