Tyler the Creator is shooting down Jaden Smith‘s multiple declarations that they’re dating…kind of. The 20-year-old actor/musician claimed during a set at the 27-year-old’s 2018 Camp Flog Gnaw Carnival that he’s his “boyfriend.” The Karate Kid star then doubled down by taking his allegations to Twitter, writing “Yup @tylerthecreator I Told Everyone You Can’t Deny It Now.” Tyler actually responded in Jaden’s thread, but he didn’t exactly say he was wrong. “Hahaha you a crazy n***a man,” the former Odd Future frontman wrote. So is it a yes or no that they’re dating? Or are the two guys just trolling fans?

Jaden performed during day two of the Carnival at L.A.’s Dodger Stadium  on Nov. 11 and declared onstage that “Tyler doesn’t wanna say, but Tyler is my muthafu**kin’ boyfriend, and he’s been my muthaf**kin’ boyfriend my whole f**in’ life. Tyler The Creator is my f**kin’ boyfriend! It’s true.” It’s not clear whether or not Jaden was joking, as he was laughing as he said it. Cameras trained on Tyler as the “Icon” singer made the shocking statement showed him shaking his finger back and forth, seeming to disagree.

Fans have been left baffled by all of this. “Serious question, when did Tyler came out? I’ve been crushing this whole time not knowing my man didn’t even want the sauce,” one fan asked in Jaden’s thread while another wrote “If it ain’t real I’m not mad but if it is real I’m so happy.” One fan scolded both artists, tweeting at them “Y’all need to stop playing with our emotions like that.” 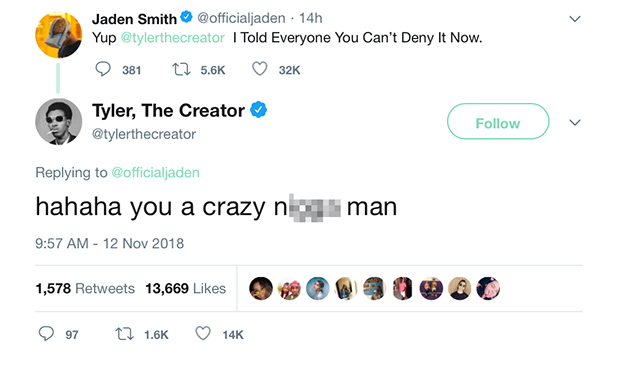 In 2015 Jaden took actress Amandla Stenberg to her prom, but she came out a year later as bisexual. He also turned heads by wearing a dress to accompany her to the dance. Jaden then went on to date Sara Snyder for two years before breaking up in 2017.  He has been a vocal advocate for non-gender conforming ways ever since he wore a dress in a layout for Vogue Korea in 2016. He defended the decision, tweeting at the time, “If I Wanna Wear A Dress, Then I Will, And That Will Set The New Wave….” Jaden also told GQ that “I don’t see man clothes and woman clothes. I feel like people are kind of confused about gender norms. I feel like people don’t really get it. I’m not saying that I get it, I’m just saying that I’ve never seen any distinction. I just see scared people and comfortable people.” So it’s no wonder fans are curious whether or not Jaden is serious or just trolling them.