Little Mix — made up of Perrie Edwards, Jade Thirlwall, Leigh-Anne pinnock, and Jesy Nelson — hit the stage at the Nicki Minaj, 34, at the 2018 MTV Europe Music Awards in Spain on November 4! It was a surprise when the British girl group joined the Trinidadian-born rapper on stage together, as they weren’t promoted as a calibration ahead of the annual show. First, Nicki followed the show’s opener, Camila Cabello to perform her hit “Good Form”. — That’s when Little Mix, dressed in different menswear styles, showed up to perform “Woman Like Me”.

Nicki stayed dressed in her bedazzle pink bodysuit for her performance with Little Mix. The rapper pulled off flawless back-to-back performances at the awards show, sporting short, platinum blonde hair. She didn’t miss a beat of choreography (neither did Little Mix), and even pulled out some R-rated moves, grinding on one of her backup dancers.

The band recently shared two videos on their official Instagram account, which gave a slight hint to fans that they were cooking up something special with Minaj for the show. The teaser videos showed Little Mix dancing to their new single, “Woman Like Me” which features Minaj. They dropped the hit in mid October, which is the lead  single off their upcoming fifth album. Woman Like Me, which was co-written by Ed Sheeran and Jess Glynne is a powerful anthem that questions if a guy could fall for a strong, “unconventional” woman.

Ain’t no drama between these queens…Nicki Minaj & Little Mix perform their brand new song ‘Woman Like Me’ #MTVEMA pic.twitter.com/GFtjJzIf3t

The group’s collaboration with Minaj also garnered a ton of attention during the rapper’s on-going feud with Cardi B. Cardi claimed she was asked to collaborate on the song with Little Mix, but turned it down, which said is the only reason why Nicki was given the opportunity. However, Little Mix came out and stood behind Nicki, saying that although their team did reach out to Cardi, they’ve always wanted to work with Nicki. 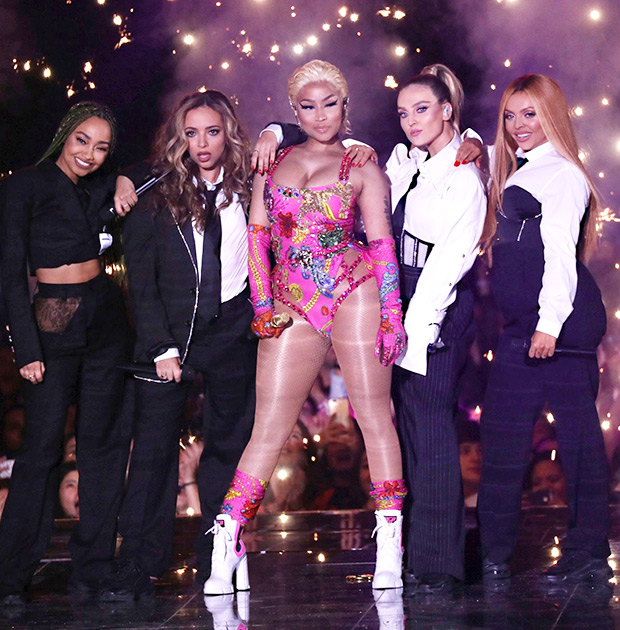 Nicki Minaj and Little Mix perform their new collaboration, ‘Woman Like Me’ at the 2018 MTV Europe Music Awards at Bilbao Exhibition Centre in Spain on November 4, 2018.

In a radio interview back in October, the girls talked about what “a dream” it’s been to collaborate with Nicki. Then, the rapper responded with a sweet Instagrm post, writing, “Dear Girls, 7 years later, & here we are. With the perfect song! All things in time right? Thank you for having me.”