Just imagine meeting a man that is handsome and charming and who loves spending time with you. You think you have met a real live Prince Charming. You barely notice when he tells you that he just doesn’t like it when you wear your hair up, so you start to wear your hair down. And so what that he doesn’t like some of your friends and wants you to spend less time with them – you start seeing them less and less.

You don’t realize that you are at the beginning of what will become a terrifying relationship with an abusive and controlling man, who will destroy your self esteem and possibly take your life.

While Donald Trump may be complaining that “it’s a very scary time” in America for young men after the Brett Kavanaugh hearings, “It’s always been a scary time for women,” according to Katie Ray-Jones, CEO of the National Domestic Violence Hotline (pic below). And in Trump’s America, it’s far scarier for women. Congress has not reauthorized the Violence Against Women Act nor the Family Violence Prevention and Services Act, both of which provide funding to investigate and prosecute violent crimes against women, plus provide funding for victim assistance services and hotlines, and funding to help victims and their children with shelter and legal aid. 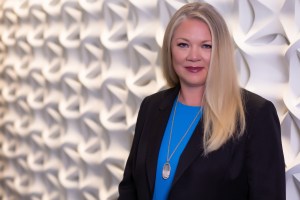 As well, since the fervently anti-immigrant Trump was elected, immigrant and undocumented women are now too frightened to report abuse to police for fear of being deported thanks to the president’s policies. And neighbors are also too petrified to report hearing or seeing women being abused, if they are immigrants themselves, according to Edaly Cardenas,a phone services advocate with the National Domestic Violence Hotline. Before Nov. 6th, when you head to the midterm polls take a few minutes to look up the records of your own Congressional representatives, and your state reps, to see if they have supported legislation that protects and aids women against violence and also check out their voting records on gun safety. Do they support domestic abusers being restricted from being able to buy guns or not?

Remember, that you, like any woman in this country could unexpectedly find yourself at some point in your life trapped in a relationship or marriage with a frighteningly abusive man. And we have a president with zero empathy for other sexually abused women like Christine Blasey Ford or the ex-wives of former White House staff secretary, Rob Porter who alleged that he punched, choked, threw and dragged them. Trump was full of praise for both Porter and Kavanaugh, so don’t expect Trump to be advocating to get the Violence Against Women Act – which was originally drafted by former Vice President Joe Biden in 1994 – passed.

Donald Trump has never appointed a violence against women advisor to his administration, as President Obama did. Is this what you want in a president or Congress?

Consider Susan Sparks experience, if you think domestic violence is something that will never happen to you. She was just 21 and in her senior year of college when she meet a smart, charismatic, extremely good looking guy in the gym of the building she was living in. “Our chemistry was off the charts and he was so interested in everything I had to say,” she recalls. The two had a blissful four years of dating in which she hardly noticed little warning signs of his controlling behavior. Little did she imagine that after twenty years of what became an “incredibly terrible marriage,” that she would be “lucky to escape with my life,” after being injured by her husband. “I left my home in an ambulance that night.”

Then and to this day she has never been able to get a longterm protective court order against her now ex husband. “When I left him, I had never been more terrified in my life that I would be killed and I’m still terrified of him,” she admits.

And listen, Susan, was someone you would have looked up to. She was a top executive in a technology company who supported her family until she retired to have two children. Highly educated and successful in her career (like Rob Porter’s two ex-wives), she didn’t comprehend that she was in an “abusive” relationship for years even as her husband insulted, criticized and belittled her as “an embarrassment,” “stupid” and a bad cook.

The emotional abuse began on her honeymoon. “The last time he kissed me was at the altar on our wedding day,” she recounts. She now believes that he, “groomed me until he knew I was his,” during their dating years. Once he knew he had her, he began to dominate and control her.

“When my career took off he would say really cruel things like, “its just a matter of time before they see through you and see you’e a fraud,” she remembers. At home, he’d tell her she was “too stupid” to make a grocery list or stack the dishwasher properly. “Whatever I did, was wrong.”

Nevertheless, she didn’t leave him until he gave her an ultimatum- give up her volunteer work with the PTA at her children’s school or end the marriage. After she refused to quit the volunteering she loved, she had to barricade herself in her bedroom at night for fear of his rages.

And in fact, when women leave it’s often the most dangerous time for them. For women who are also immigrants, the National Domestic Violence Hotline has been hearing from desperate women in Trump’s America, whose husbands have taken and hidden their documentation and have threatened to report them to ICE, so they will be separated from their children and deported, if they try and leave the marriage.

“There’s a lot of fear from domestic abuse survivors right now who are immigrants around being able to stay in this country or be separated from their children,” explains Ray-Jones.

Lots to think about as you plan to head to the polls Nov. 6th.

There are a multitude of issues to consider as you prep to vote — your healthcare, reproductive rights, gun safety, career opportunities, but don’t forget that domestic violence is something you or someone you love could face at some point. Are you electing officials that will protect you?If you are a victim of domestic abuse or know someone who is, you may find it helpful to check out Susan Spark’s website, www.thesoda-pop.com, and/ or her book, ‘Sparks in Love‘.

If you do believe you are or someone you love is a victim of domestic abuse and want to help, call the National Domestic Violence Hotline at 1-888-799-7233 or go to their website and vote!