You’ve gotta give Heidi Klum mad props for the effort she puts into Halloween year after year. On Oct. 31 the 45-year-old held her 19th annual costume party and absolutely killed it as Fiona from Disney’s animated franchise Shrek. Not the pretty princess either, but the big green ogre she turned into after being cursed. But Heidi isn’t the first star to rock an ogre Fiona costume as Arrow star Colton Haynes, 30, donned the look as his “dream costume” for Halloween in 2014. We’ve got the side by side to see who rocked it best.

Heidi documented her journey to become Fiona via her Instagram account throughout the say, posting videos of many steps along the process having prosthetics put on her face and chest. Then she had to get the green coloring all over her skin to match Fiona. Fortunately Heidi’s a patient woman who has been known to spend over 48 hours before her annual party getting her costume makeup applied depending on how elaborate the look is. From the time Heidi started her video journey on IG, she spent eight hours making her transformation into Fiona. 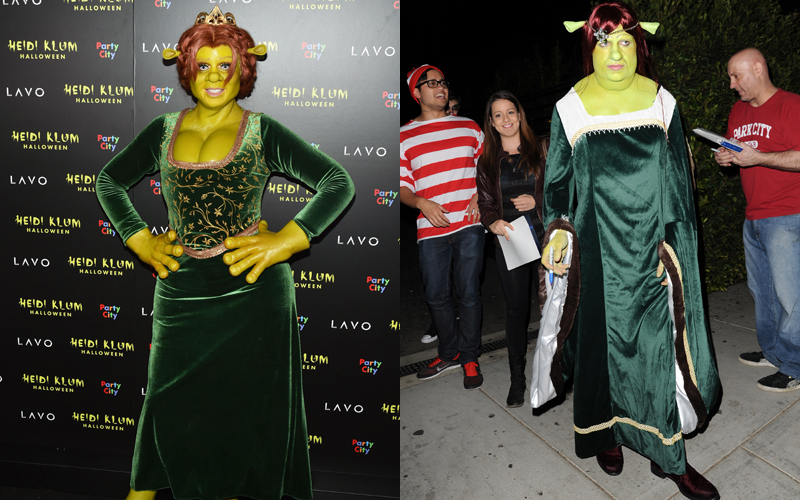 So who wore it best? Both Heidi and Colton absolutely crushed it as Fiona. They had slightly different takes on the actual dress for the costume. The former Project Runway host actually matched her green velvet gown down to a tee as the animated character. But she’s also a woman with smaller shoulders and a waist so she was able to do that unlike big hunky Colton. Bravo to both for doing Fiona proud.