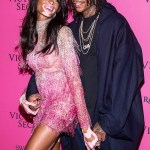 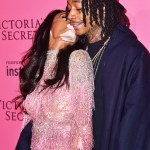 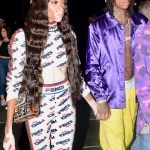 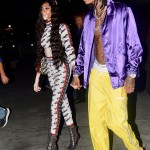 Wiz Khalifa and Winnie Harlow proved their romance is going strong when they were seen holding hands while leaving an L.A. Lakers basketball game on Oct. 20.

Wiz Khalifa, 31, and Winnie Harlow, 24, looked very much like a couple on Oct. 20 when they left the L.A. Lakers game at the Staples Center and were holding hands. The gorgeous duo have been dating for a few months now and their most recent outing showed that they’re still very much enjoying their romance. Wiz showed his Lakers pride when he wore a purple jacket and yellow pants for the outing and Winnie looked amazing in a matching Fendi crop tip and pants.

The Canadian model and rapper confirmed their romance back in Aug. of this year after being seen getting cozy at Wiz’s album release party in July and ever since they’ve been closer than ever. Even Wiz’s ex-wife, Amber Rose, has positively commented on her ex’s new love. “I met Winnie on several different occasions. I think she’s a f**king sweetheart,” she told Us Weekly.

Wiz obviously feels the same way about Winnie and we can’t say we blame him! The brunette beauty has been the highlight of the modeling industry lately and has been working hard to strut her stuff on famous runways such as the one for the Victoria’s Secret show. She recently shared an Instagram video in which she explained her excitement for the VS show and the goals she has for herself. “#TRAINLIKEANANGEL means so much more to me than just being in the gym. For my first year walking for VS, I want to make sure my body is the best it’s ever been AND I want to keep my mind right,” she said. “My goals this year are to stay very hydrated and to read some new books.”

Another goal Winnie seems to have is to keep things steady in her current relationship with Wiz. We love seeing these two together whenever we get the chance and we wish them a lot of happiness now and in the future!