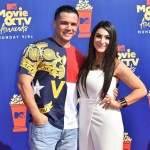 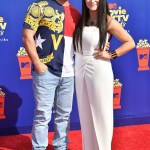 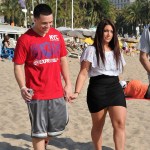 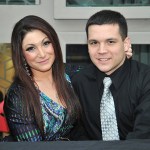 Last night’s episode was packed! As if couple’s therapy reveals and birthday bashes weren’t enough, Deena and her husband revealed the sex of their baby — and its name. Too cute!

Just because Deena Cortese, 31, and her husband Chris Buckner, 29, revealed that they were having a baby boy back when they announced their pregnancy in July, that didn’t make their gender reveal party any less special on the Oct. 18 episode of Jersey Shore Family Vacation! The sweet moment took place at a backyard party with all of the couple’s friends and family in attendance. Deena literally couldn’t wait for the colored smoke signal. “I’m dying,” the mom-to-be said, flaunting her baby bump in a floral dress. But she didn’t have to wait long before blue smoke rose.

After she and Chris yelled and hugged, Deena also revealed their baby boy’s name. “Now I can name my son after Chris and my dad,” she said. “Christopher John.” Yay! We love that and can’t wait to find out whether they stick to that sweet moniker when he arrives. Fortunately, that major moment isn’t too far away. In fact, when Deena and Chris announced that they were pregnant, they also revealed that their little one was scheduled to arrive in December. “We have a sweet little boy on the way,” the reality star wrote in her Instagram caption. “We are truly blessed and our hearts are filled with so much joy and happiness. December can’t come soon enough.”

But Deena didn’t just post about her pregnancy reveal! She also shared footage of the gender reveal party on social media after the episode aired, writing, “Tonight, watch the moment me and @cbuckner_ found out we were having a little boy.”

We couldn’t be happier for these two to welcome their baby boy — and to see him have playdates with all of the Jersey Shore kids. Here’s to the next generation!