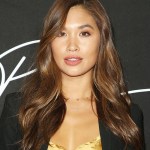 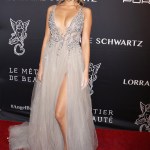 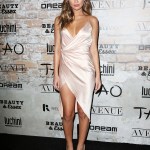 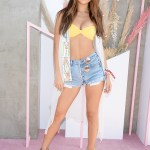 The Bad Boy icon is single again! Sean ‘Diddy’ Combs and Cassie have reportedly ended their 10-year relationship, and he’s supposedly dating 26-year-old Jocelyn Chew. Get all the facts on her.

Diddy, 48, and Cassie, 32, have broken up, closing the book on a ten-year relationship, according to LoveBScott (Cassie’s rep confirmed the split to the site.) Supposedly, the split happened months ago and since then, Diddy has been “quietly kicking it” with Jocelyn Chew, 26. The young model – who is represented by Vision Models LA, Wilhelmina and MGM – has appeared in campaigns for American Eagle, was a contestant on The Face, and has an Instagram page that’s hotter than the beach in July. While fans get to the bottom of whether or not Diddy’s dating this woman, get to know more about her.

1. She’s Canadian, Chinese and Icelandic. When asked where she grew up, Jocelyn told GQ she’s from “Canada. Victoria, BC … on a farm.” Her Instagram page lists her as an Icelandic/Chinese Canadian model, and she told GQ in 2017 that of all the places she has never been but want to go, she’d go to “Africa! And Iceland (I’m half Icelandic on my mom’s side.)

2. Jocelyn got a major career boost, thanks to Naomi Campbell. Remember The Face, the short-lived reality television modeling competition featuring Naomi Campbell? It was on the air for only two years – 2013 and 2014 – and Jocelyn was one of the twelve models competing in the debut season. “I was nervous, for sure, to first meet Naomi,” she told Zimbio in 2013. “But at the same time, I was excited because it’s not every day that you get to meet someone so iconic. So I would say nervous and excited. A mixture of both.”

3. …but she didn’t win. Jocelyn was eliminated on the show’s seventh episode. “My experience was a good experience. I don’t think that Naomi’s necessarily a diva. To me it’s just like she knows what she wants and she knows how it should be, and I think that she doesn’t beat around the bush with her critiques. She’d rather just be direct instead of wasting time on trying to sugarcoat things.

4. She loves to travel and have fun. “Ready Player One,” she captioned a Sept. 3 picture of her in a neon-purple wig and lemonade-yellow swimsuit while posing in front of an electric pink truck at Burning Man. A few days later, she shared a shot of her at the U.S. Open in New York City. “What an experience today, watching the US Open Women’s Finals.”

“I’m a thrill-seeker,” she told GQ, “so I’m always the model being asked to do something crazy. On set I’ve surfed in the ocean, ridden horses down a beach in the Dominican Republic, and gone snowboarding down a mountain in Argentina. One time on set we took helicopters to the top of some Canadian glaciers to shoot a winter campaign in summer.”

5. She’s gamer. “I have a hard time staying in one place, I get bored easily. So if I have enough time off, I like to go traveling with my friends and family. To me, life is about making memories and experiencing as many new things, ideas, and cultures as possible.” However, she does manage to get a few games in when she can. “Sooo….who wants to play duos?” she asked on June 16, holding up a Playstation controller. “What’s your user ID? Smdh I love fortnite so much.”