That’s one hot mama! Kylie Jenner showed off her rockin’ post-baby body in a sultry new Instagram pic, and BRB while we hit the gym.

Kylie Jenner treated us to a sexy mirror selfie and it seems like she’s getting in the spirit of Halloween! The 21-year-old snapped a pic of herself rocking a pair of white sweat pants and a white sports bra, with her blonde locks also on display. In the Instagram Carousel captioned with a ghost, Ky also rocked a Burberry fanny pack across her chest, and what looks like a sparkling diamond necklace. In the first pic, Kylie pulled down the front of her pants with her thumb and showed off her enviable flat tummy, just 8 months after giving birth to her daughter, Stormi. In the second, she put her hand on her head and pursed her plump lips for the camera.

Kylie’s bare ab pics comes just days after she took to the gram to promote her new Kylie Cosmetics Halloween collection with a curve-hugging black turtleneck. While there has been talk of Kylie wanting to get pregnant again with her beau Travis Scott, by the looks of these pictures, she’s definitely not expecting yet! However, a source close to the couple recently told HollywoodLife.com that Kylie “would absolutely love to have another baby with Travis, but she wouldn’t be terribly disappointed if it doesn’t happen sometime soon.” They added, “Kylie definitely wants to have more children at some point and she’s having a lot of fun practicing with Travis in the meantime.” LOL, oh boy. They better get to work, though, since she just admitted to James Charles that she wants “like seven girls, then maybe I’ll consider a boy.” 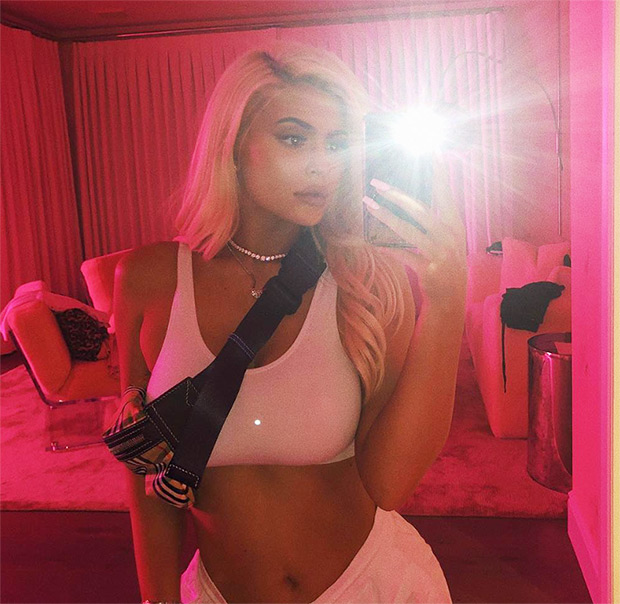 Well, there is no denying Kylie Jenner’s post-baby body is fabulous, and seems to be loving motherhood! We can’t wait to see more little Kylie’s running around.