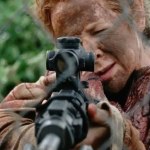 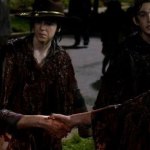 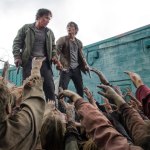 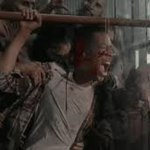 Someone’s losing a limb on this episode of ‘The Walking Dead’ — but who is it? Take a deep breath, and take a look! We’ve got all the details.

It’s been a long time since we’ve had an amputation on The Walking Dead. Think about it — Herschel’s leg was cut off when he was bit by a walker all the way back in season three. But in the second episode of the show’s ninth season, another limb is lost! And this time, it belongs to Aaron. The Alexandria native, introduced in season five and played by Ross Marquand, 37, has been willing to sacrifice for his group and their cause all along, but this scene takes that dedication to a new level. As if it wasn’t bad enough that he recently lost his husband, Aaron’s now missing an arm!

So how does he lose it? Unexpectedly, a walker isn’t the culprit here, at least not directly. Instead, a huge tree trunk falls directly on Aaron’s arm while he, Rick, and some of the Saviors are rebuilding a bridge. When a herd of walkers begins approaching, one of the guys panics and drops his end of the massive log. Aaron is trapped and can’t move the heavy trunk, but while he bravely tells Rick to leave him, it’s not surprising in the slightest that the leader of the group ignores him and takes on the rest of the undead. Once they’re safe, freeing Aaron is a struggle and takes multiple men, but his limb does emerge. The only problem is, it’s a gory, mangled mess.

Of course, this accident comes just after Siddiq, the doctor on site, leaves Edin in charge. The teenager, played by Katelyn Nacon, 19, has been assisting him but doesn’t have nearly enough experience for an injury like this. Still, with no time to spare, she consults her books and orders an immediate amputation. And when asked about anesthesia, she simply says, “There’s no time.” Daryl holds Aaron down for the surgery, and the next time we see the patient, he’s pale in the same bed with a bandage wrapped around his nub — still very much alive. Phew!

For fans of the comic, this amputation may come as a shocker. While Aaron always had two arms in The Walking Dead, Rick actually lost his right hand in the books during his first encounter with Neegan. And while show runners considered replicating that major moment, using all of that CGI for a main character was simply too expensive.

Now Ross’s character has taken his place in this tragedy — but hey, at least he’s still breathing. The same can’t be said for Gregory, who was hanged in the last episode, joining countless other dead characters over the course of the show.

The only people dying in this episode were Saviors, and it remains unclear who’s going after them! They do have so many enemies, after all. But with another surprise romance sparking up, as well as a foreboding threat from an imprisoned Neegan, fans are sure getting a lot of drama while they wait for more info on who’s slaying Saviors.