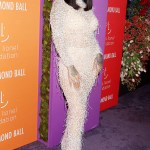 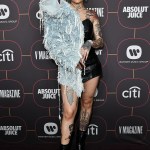 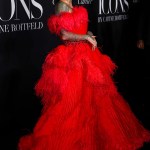 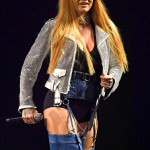 To celebrate the new life in Kehlani, here’s a roundup of all the times she gave us life with her beauty and fierce fits! See the singer rock everything from feminist tees to blonde hair, here.

The Internet popped off on the day Kehlani, 23, announced her pregnancy. The “Distraction” singer broke the news that she’s four months along and debuted her baby bump to Instagram on Oct. 12. We’ve had over a day to process this exciting milestone, but we want to keep the ball rolling — let’s obsess over Kehlani some more! We’ve compiled the singer’s hottest shots, whether they happened on the streets of Tokyo or in her bathroom mirror. Kehlani is the ultimate style chameleon! Give her any setting, look, hair color, and she’ll rock it — take a peek through our gallery above for proof.

The singer can snap between bohemian princess to fresh-off-the-runway fashionista. Kehlani flashed a sunny smile in her crochet flower top in the baby bump post, but just months earlier, she strapped herself in a Gucci crossbody bag to stroll around Harajuku in May. The Oakland native took her designer threads to New Zealand as well, wearing a holy trinity of designers in Auckland: Roberi & Fraud, Maison Margiela’s MM6 line, and Acne Studios. “3 tours in 3 months, sounds good to meeeeee,” the globe trotter captioned the shot, which you can check out in our gallery above!

But even after a parade of high-end labels, the expecting mother knows how to keep it real. Kehlani celebrated International Women’s Day in March with a Phenomenal Women Campaign’s T-shirt and au naturel face! “Over the last year, we’ve seen an unprecedented movement for women’s rights, and one thing is clear: our time is now,” the “Gangsta” singer wrote. “We are phenomenal, and we will make the world a better place for all women.” Amen to that! She continued to keep it minimal in a hot red bikini while frolicking in Guam’s waters — you can see all these shots in our roundup above!

Kehlani will be raising her daughter with bisexual partner Javie Young White! She confessed the behind-the-scenes details of the conception. “It was bomb and we did have a lot of it, we practiced a lot. We had a short time frame to get pregnant so we had a lot of it,” she told Nicki Minaj’s Queen Radio, calling into the podcast right after sharing her baby bump. She continued to share, “I was three weeks [along] when I found out I was pregnant. I feel like this baby was already coming into my life, because it only took us to my first cycle of ovulation. I’m real fertile!” We’re beyond thrilled for Kehlani and Javie.