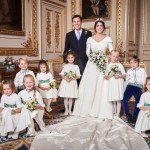 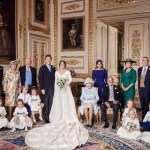 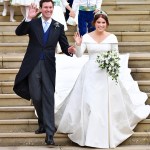 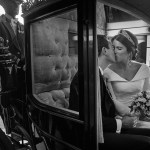 Princess Beatrice looked amazing while supporting her younger sister at her wedding! Princess Eugenie‘s maid of honor arrived at St. George’s Chapel in Windsor Castle wearing a navy coat with matching knee-length skirt made by Ralph and Russo. She accessorized with a hat of the same color as her outfit by Sarah Cant, pale blue heels with matching handbag, and a brooch on her jacket’s lapel.

The night before the nuptials, Eugenie gushed about her maid of honor in a televised interview where she discussed her wedding. She said that her “big sissy” Beatrice was someone she’s “looked up to” for her “whole life” and that she’s the biggest supporter of “team Eug and Jack.” Aww!

While we’re in awe of Beatrice’s dress, we’re really most excited to see the bride’s gown. British Vogue recently asked Eugenie who will be designing her dress, but she kept quiet on the details. “I’m not telling anyone who is making it, but I can say it is a British-based designer,” she said.

She continued, “[The dress] is the one thing that I was really decisive about. As soon as we announced the wedding, I knew the designer, and the look, straight away. I never thought I’d be the one who knew exactly what I like, but I’ve been pretty on top of it.”