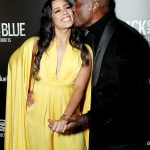 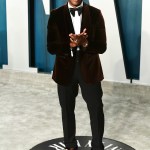 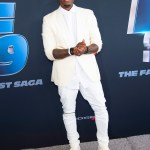 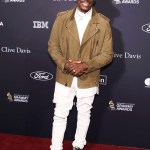 Tyrese got 50/50 custody of his daughter last year, and the good news just keeps coming! His wife Samantha gave birth to their first baby girl. Get all the details on their newborn here!

And just like that, Tyrese Gibson, 39, is the proud daddy of not just one little girl, but two! The actor’s wife Samantha Lee, 29, gave birth on Oct. 1, which is such a relief because there hasn’t been anything fast or furious about this pregnancy. It feels as if we’d been waiting forever for Tyrese and Samantha’s baby to join the fam, even though the couple only announced that they were expecting back in April. Their new little girl is named Soraya Lee Gibson and the actor posted a sweet Instagram pic showing the inking of her little feet while noting that his wife was in full labor for over a day before their bundle of joy arrived.

God we love you for delivering on your promise princess Soraya Lee Gibson is here…… 8 pounds 6 Oz our lives just changed forever……. #PrincessGibson #ShaylasLittleSister#SamanthaGibsonGreatestMotherOfAllTime. My wife is the real champion 30 hours of labor I witnessed first hand the strength of a woman….. Thank you Jesus we are so humbled by your grace and love and favor…. #Amen” he captioned the pic.

They broke the news to friends and family in the spring by showing them a ‘movie trailer’ that ended up actually being an ultrasound video. What an epic fake out! From there, Tyrese started posting the occasional baby bump pics on Instagram — including ones from the sexy maternity shoot he surprised his wife with — and that only made us more pumped. But now the wait is over!

Father God we love you for delivering on your promise princess Soraya Lee Gibson is here…… 8 pounds 6 Oz our lives just changed forever……. #PrincessGibson #ShaylasLittleSister #SamanthaGibsonGreatestMotherOfAllTime my wife is the real champion 30 hours of labor I witnessed first hand the strength of a woman….. Thank you Jesus we are so humbled by your grace and love and favor…. #Amen

This little one joins an incredible, tight-knit fam. Tyrese married Samantha, a social worker, on Valentine’s Day in 2017 and they seem SO in love. (Exhibit A: the secret, sexy maternity shoot). But they don’t just make a great couple, they make great parents as well. Tyrese has a 10-year-old daughter Shayla from his first marriage to Norma Gibson, but that hasn’t stopped Samantha from treating Shayla like her own. And when Norma to get a permanent restraining order to keep Tyrese away from their daughter, Shayla, claiming he’d abused her and needed a mental evaluation, the actor fought back. He ended up winning 50/50 joint custody in court, after posting many emotional videos to social media begging not to have Shayla taken away.

So what a doubly sweet year this is! Tyrese went through a traumatic custody battle, but we bet it’s going to make him appreciate having both girls around all the more. We can’t say congrats enough!