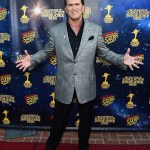 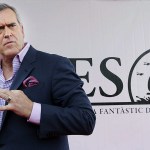 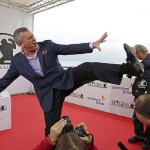 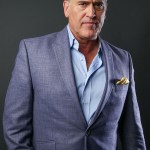 He’s fought demons with a chainsaw, but on ‘Lodge 49,’ Bruce Campbell takes on a more fearsome foe: land development. He EXCLUSIVELY chats with us about the show, how Marilyn Monroe was almost his aunt, being part of a secret order and more!

Spoiler alert: Bruce Campbell is not part of the Illuminati (as far as we know.) Yet, he is involved in a secret order, which makes his involvement with Lodge 49 a match made in heaven. The cleverly written AMC series – created by Jim Gavin and executively produced by Peter Ocko and Paul Giamatti – is a comedy-drama with a dash of “magical realism” by way of the Cohen brothers. Ex-surfer (Wyatt Russell’s Dud) struggles with the death of his father and a snakebite on his foot that won’t heal.

Through fate or circumstance, he gets involved with Lodge 49 of the Order of the Lynx and Ernie (Brent Jennings), a plumbing salesman whose personal quest leads him to the feet – or, in this case, kiddie pool – of Gary (Campbell.) Needless to say, the show isn’t Ash Vs. Evil Dead — which Bruce talks about in this episode of the Hollywood Life podcast — but it’s still fun as hell.

Bruce EXCLUSIVELY tells HollywoodLife.com how it was like working on the show, why you won’t see him in a Marvel superhero movie soon, and why everyone should at least try asking their own “Marilyn Monroe” out on a date.

HollywoodLife.com: I caught up on Lodge 49 and it’s a surprisingly hilarious series.

Bruce Campbell: It’s kind of cool, isn’t it? It’s just quirky enough. It’s a case when these guys did a great job fleshing characters out. When the hell would you have a TV show about a guy who’s a plumbing sales rep? It just doesn’t happen. That’s what’s so nice about it. And I’m a member of The Elks, back in Oregon, which is a national organization and so I know what those weird clubs are. It’s kind of fascinating.

The Elks, were formed as an after-hours, actors’ drinking club. When I joined the Elks, I read my — you got to sort of ‘repeat after them’ — I did it like [William] Shatner, man. I was, ‘you need me. You need me to keep the street cred of this place. You need actors!’

It was in the spirit of the club.

When I was watching, I realized — there are couple of episodes left, so this can change — this was one of the few roles where you weren’t completely covered in blood, shot at, stabbed, bitten by a demon or blown up.

Did you enjoy the change of pace?

Always. Always, always. I said to my co-stars on Ash Vs. Evil Dead — Dana DeLorenzo and Ray Santiago — I said, ‘you know, when this gig is over, you’ll never have a gig this hard ever again.’ You’re gonna go, and get on some soap opera, and you’re gonna go, ‘When does the blood hit me? When do I get put into the flying harness,’ or some horrible rig or special effects thing.

And we’re introduced to your character on Lodge 49 as he’s sitting…in a pool.

[laughs] That’s right. On a sh*tty construction site. And its so typical. You know, these big rich developer-types, half the time they’re running around on undeveloped lots. You know, it’s very unsexy, a lot of what they do.

And they’re always dressed to the nines, where as your characters was practically naked.

The audience really gets a feel for Gary when he describes himself as ‘a great man in a grey world.’

It seems that a lot of your roles can be described like that, as the heroes that you play are never 100% pure.

That’s the way to go. Give me a hero with flaws, for god’s sake. That’s why it was fun to revisit Ash Vs. Evil Dead. Talk about a flawed character. Jesus. We tried to make him more flawed. It just makes him more interesting.

The Marvel movies are great — I’m always happy for my fellow actors working in these very success movies — eh, the super hero thing, that ain’t for me. They’re not flawed enough.

Well, a lot of people would consider Ash a hero.

Well, he IS. But he’s a real hero. He’s a hero with a drinking problem. That’s what’s so awesome. He’ll smoke reefer before he goes after a demon. I think a couple seasons ago, he was taking — I think it was — mescaline — you know, it’s awesome. Those are the fun ones to play. So, this guy, you know, Gary’s a fun one. On the outside, very successful. He’s sorta mythological in the development business. But, his life is falling apart. And, man. Show me a successful person, and I’ll show you someone who’s life is falling apart. It really is — it’s so true of so many people.

Well, we here at Hollywood Life, we do hear some things.

True. Though, I found him very charming, even though he has all these flaws.

Right. Well, it’s funny. At the end of the day, he kept those guys around ’cause he just liked them. He liked hanging with them and he was lonely. You know? It’s so typical of that.

I heard one time — Marilyn Monroe. No one would ask her out, because they always assumed she was with somebody. And an uncle of mine was an animator for Disney, years back in the Fifties, and they said, ‘hey, Marilyn Monroe’s looking for a date to the Academy Awards. Do you want to do?’ He’s like, ‘bullsh*t. She’s not looking for anything.’ And she didn’t go that year, because she didn’t have anyone to go with. Ain’t that weird?

That’s such a missed opportunity!

So, it’s funny how the guys, the plumbing salesman [on Lodge 49] is like, ‘you gotta get to that guy! We’ll be on easy street.’ [laughs] And schemes are fun to watch, too. You can always relate to some guy — a man or woman — who’s trying to improve their situation.

It’s a universal appeal. Everyone’s trying to hustle and get ahead.

Speaking of that, I was racking my brain — have you ever played a straight-up villain?

Oh, yeah. There was a movie called Assault On Dome 4. Really cheeseball sci-fi. They offered me the lead guy, but his lines were like this: “Get down!” “Come on!” “Run!” “Now!” Stuff like that. It was really boring, and the bad guy had these great speeches. I went, “I’ll be the bad guy. I’m not going to be the good guy.” So they let me play the bad guy, and I got to watch the guy they cast in my role [Joseph Culp] I got to watch him suffer for the whole shoot, since he had the worst dialogue. Like, ‘You poor bastard.’

At this point in your life and career, do you prefer doing television or movies?

Uh, yes. The answer’s ‘yes.’ Now, it takes more to get me off the mountain. I have a very nice place in Oregon. You know, I’m kind of done looking at tennis balls on sticks, a lot of the very ‘effects-laden’ stuff, because there’s no sense of continuity when you act. You’re literally going shot from shot, not really seeing the scene. So, yeah, I’m still going to do whatever comes down the pipe but it’s got to be like, AMC. It’s got to be like Lodge 49 and [the show’s executive producer] Paul Giamatti. That’ll get me off the mountain.

It’s time to be more selective. I’m 60. How much longer can I be dousing myself in blood and going through the whole rigamarole. I’m like, ‘I think I’m old enough for this.’ The Star Wars guys, they were pushing it. They were pushing it, wheeling those guys out and propping them up on sticks. That was right on the edge.

No offense, but it just seems natural.

Yeah! Wear the bright colored outfits, torment people up on stage. I have the street cred [since] its a pop culture show. It’s questions like “How much does Thor’s hammer weight? it’s not geography. It’s not history. You don’t have to phrase it in the form of a question. It’s a fun format because everyone who comes through that door plays. You get a voting device. And so, the top four people in the first round come up and it could be anybody. We don’t vet anybody. And it’s kinda fun.

We do two rounds of that, so someone who tried the first time and couldn’t get in, they have a second chance to get up there. And once they see that we’re just having fun, as a lot of people get nervous by getting up in front of crowds — especially people who are kind of nerdy — but, once the joking insults start to fly, they relax and its fun.

One last question — I read that you’re working on a new book of essays. What can fans of your previous books expect for this new release?

This will be different. This will be real stuff. Essays are a little more in-depth, into what you actually think about sh*t. It’s not really a book of rants. I’m going to try to avoid that. It’s just more sort of insightful commentary on everything that’s happening. Pretty much everything. A lot of different subjects.

I want to do more writing. I put my third book [Hail To The Chin: Further Confessions Of A B Movie Actor] last year, and it reached the No. 8 spot on the New York Times Bestsellers List. I’m like, “you know what? I’m going to write more.” That’ll keep me up on the mountaintop. That’s a really fun thing, because creatively, I’ve actually found that writing books is the most creative thing I’ve ever done.

You don’t have any chefs. There are very few chefs involved. You make a movie, everyone has a opinion. Make a TV show? Holy sh*t. Sometimes you want to change a line of dialogue, you got to get on the phone, y’know? Creatively, writing books is the way to go. Hopefully, 2020. I want to do 20 cities in 2020.