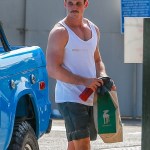 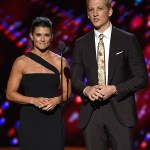 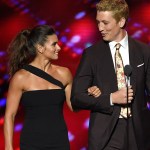 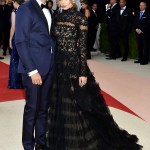 Miles Teller displayed off his epic muscular makeover after leaving the gym after a workout. Check out his complete transformation below!

Miles Teller exited the gym where he’s been getting in shape for Top Gun 2 looking like he’ll probably have the top guns in the cast, which is, as regrettable of a pun this is, accurate. Seriously, he’s got everything covered in terms of his workout checklist. Pecs? Check. Triceps? Check. Epic mustache? Check, check, check. We’ll have to wait and see how this makeover appears in Top Gun: Maverick. In the meantime, take a look of the pic of his makeover below.

We reported earlier how Miles got engaged to his longtime girlfriend Keleigh Sperry back in August of 2017. The Spectacular Now star asked his then-girlfriend of four years, and now-fiance, to marry him while he was on an African Safari. Keleigh’s sister Christie York shared the news on Twitter, writing, “These 2 got engaged while on an African Safari over the weekend!!”

Way back in 2016, Miles and Keleigh suffered a terrifying car crash. Miles was driving his blue Bronco at the time when an Uber driver allegedly made an unsafe left turn, resultingd in Miles striking the car and his truck flipping over, reported TMZ at the time. While Keleigh was in the passenger seat at the time, thankfully neither of them were injured from the altercation.

We’ll keep you posted with all of the latest news surrounding Miles and Top Gun 2. In the meantime, check out all of the pics of Miles in our gallery above.