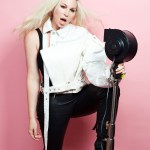 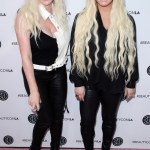 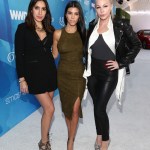 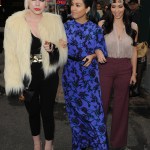 Former longtime Kardashian makeup artist Joyce Bonelli just got married and we’ve got the pics from her gorgeous Malibu wedding to Ben Taverniti.

Makeup artist Joyce Bonelli was so much a part of the Kardashian sisters’ life that she was practically a member of the family. She’s moved on quite nicely after parting ways with the K-squad earlier this summer after over a decade of work making them look beautiful. Joyce has just revealed that she married the father of her 21-month-old twins, Ben Taverniti. The goddess of glam took to Instagram on Sept. 20 and shared a pic of the couple kissing on the beach in Malibu in their wedding attire with the caption “Mr & Mrs Taverniti.”

Ben wore a simple black shirt unbuttoned to his chest with matching black slacks, but Joyce’s racy wedding dress stole the show. The 37-year-old showed off her ample cleavage with a bodice that rose up from her gown’s waistband with two panels that barely covered her boobs. While the top half of her gown was incredibly flesh baring, the lower half consisted of a figure hugging lace overlay skirt that featured a fishtail silhouette at the bottom.

Joyce accentuated the look with a long flowing veil that blew behind her in the wind. Her dress featured a long wave of netted fabric attached to the back of her waist to give the illusion of a long train, as well as a trail of material matching her stunning lace gown. Joyce’s precious twins Raz and Kal-El wore all-white tuxes alongside their older half-brother Zeplin. 6, from a previous relationship.

The wedding actually took place last month, as according to Ben’s IG, it went down on August 28 but Joyce is deciding to share the photos now. It doesn’t appear that any of the Kar-Jenner ladies were present for the ceremony after the falling out they had over the summer. The sisters all unfollowed Joyce on social media and none of them have sent along congratulations on her marriage yet. Joyce announced in 2017 that she was launching her own makeup line Cosmetiques, which would end up competing with Kylie’s $900 million cosmetics empire along with Kim’s KKW beauty.

While the sisters have cut off contact with Joyce, she still uses her work with them in photos on her Instagram. She was with the family before they rocketed to superstardom and the makeup artist posts examples of her masterful work she did with their glam looks. While the Kar-Jenners have yet to show any love, other celebs have. Jessica Simpson commented “Gorgeous!!! You deserve all the happiness in the world!!” and RHOA star Kim Zolciak wrote “Congrats doll!! So stunning!