Look at this beautiful mother/son moment! Candice posted a pic feeding her two-month-old baby in a bikini, and it’s oh so sweet. See for yourself!

Friends who breastfeed together, stay together! Candice Swanepoel, 29, and her friend Barbara Di Creddo took their babies with them for a fun beach day and breastfed together. The two mommy models were photographed on towels in the shade with their little ones held to their chests. Both wore matching smiles on their faces, while Candice sported a mismatched bikini and Barbara rocked a black one-piece. Too cute! The Victoria’s Secret model hasn’t been shy about breastfeeding since giving birth to her first baby boy Ariel with Hermann Nicoli. So now that she’s on her second, Anaca, seeing her proudly show this off isn’t a surprise. She didn’t even mention what she was doing in the caption, simply writing, “Beach babes.”

But that doesn’t mean we aren’t loving this show of support for the normalization of breastfeeding. Considering so many stars get shamed for this natural act on social media all the time, we love when celebs flaunt their feeding — and when they savagely clap back. Who could forget when Chrissy Teigen, 32, told off a negative Twitter follower who said they didn’t want to see her nursing just because it was “natural.” The mother of two wrote, “I don’t care to see grainy fireworks, coachella selfies or infinity pool pics but i let people live. calm your t*ts and scroll on by.” Yes, queen!

Candice hasn’t made any official statements defending breastfeeding, but a picture is worth a thousand words. And who knows, maybe she’ll take this to the runway? Model Mara Martin walked the catwalk while breastfeeding in July, and we could totally see Candice doing the same thing. 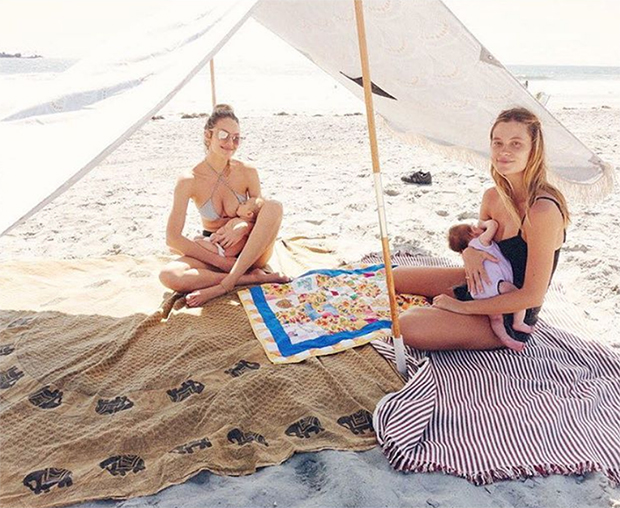 We love that Candice and Barbara are both out to make this the new normal. So many fans have thanked them on Instagram for sharing such a beautiful breastfeeding photo. “Keep breastfeeding mammas!” one wrote. We couldn’t agree more!