Justin Bieber gave off real Brad Pitt in ‘Legends of the Fall’ vibes while out with fiancee, Hailey Baldwin! The two were photographed in Beverly Hills on Aug. 30, and you have to see the singer’s ’80s-inspired look!

Justin Bieber, 24, has a brand new look and we’re digging it! The singer stepped out in Beverly Hills sporting slicked back hair and a mustache, giving us major Brad Pitt vibes. The actor donned a similar look in his 1994 film, Legends of the Fall, where he rocked a grizzly beard and long hair. JB went with the scruffy mustache, instead of the whole beard, but the vibes were certainly the same. The resemblance is uncanny, isn’t it? — Take a look at both Bieber and Pitt, below.

The Biebs was out with his fiancée, Hailey Baldwin, 21, on Thursday, August 30, when they were photographed together. The newly engaged pair was all smiles as they exited the Montage Hotel in Beverly Hills, a frequent hangout spot for JB. The two have been inseparable ever since they became engaged back in July, having been photographed roaming around New York City on numerous occasions. JB and Hailey were recently spotted taking pictures with fans in his native Canada. The model even posted a cute photo of her cuddled up with JB on a boat together on August 19.

JB and Hailey got engaged while on vacation in the Bahamas in early July. He surprised her when he popped the question in front of onlookers at Baker’s Bay Resort with a custom $500,000 massive, oval-shaped diamond ring. The couple, who’ve been friends since they were young teens, dated in 2015 and 2016. It wasn’t until June 2018, that they decided to rekindle their romance. 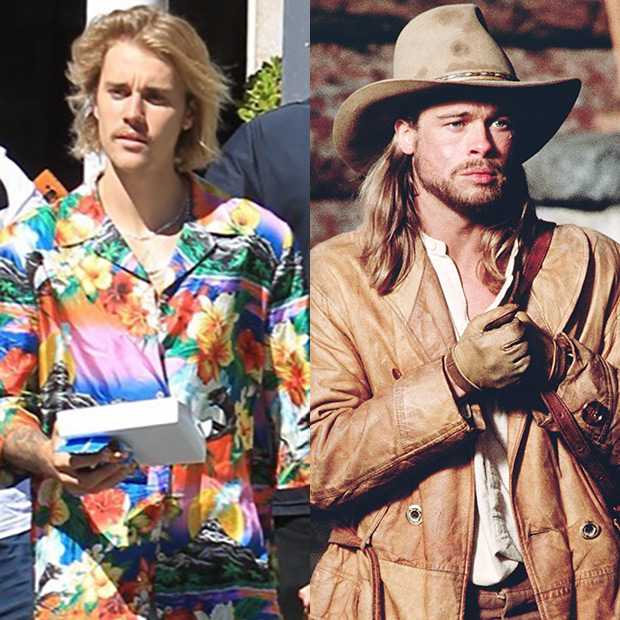 Justin Bieber channels Brad Pitt from his 1994 film, ‘Legends of the Fall’ while in Beverly Hills on Thursday, August 30.

While the lovebirds have yet to release any details about their nuptials, someone else has. Hailey already picked out their bridal party, which includes [Hailey’s sister] Alaia [Baldwin] and [cousin] Ireland. Hailey’s aunt, Kim Basinger, 64, revealed that the two family members will be in the couple’s upcoming nuptials during an interview in mid July.