Feel free to do a double take — or even a triple! Sam Hunt, 33, showed up to the ACM Honors ceremony in Nashville literally looking like a different human being. Not only were his signature locks shaved off, but his beard had left the building as well. So just to sum things up, the country star went from having a full head (and face) of hair to just rocking a couple of eyebrows. The crazy thing is, he’s had his hair shaved like ALL SUMMER and nobody noticed. His bald head was flying under the radar for months before this red carpet debut. But while the new — can we still call it that? — look is shocking, there’s no denying that Sam’s still handsome! The “Body Like a Back Road” singer wore a tan suit and a white button-down to the ceremony, where he accepted the Gene Weed Milestone Award.

TBH, we don’t know how to feel about this drastic new ‘do. We wonder what Sam’s wife Hannah Lee Fowler thinks about it? It’s definitely gotta take some getting used to, but whether she prefers the scruff or not, we know she’s got nothing but love for her hubby. Their love story is so sweet — even though it didn’t start that way! Hannah was actually living in Hawaii after she and Sam broke up for a bit, and he took seven trips out there to convince her to commit to him. And that was just over the course of three months! But not longer after she did, the country signer got down on one knee and they were married less than five months later. Sam said it was perfect. “Hannah was happy and that was my number one priority, so it worked out.”

And then they lived happily ever after — and bald. If we’re being honest, we need to see Sam sing one of his hits with his shaved head before we believe that it’s really him. Can you blame us? 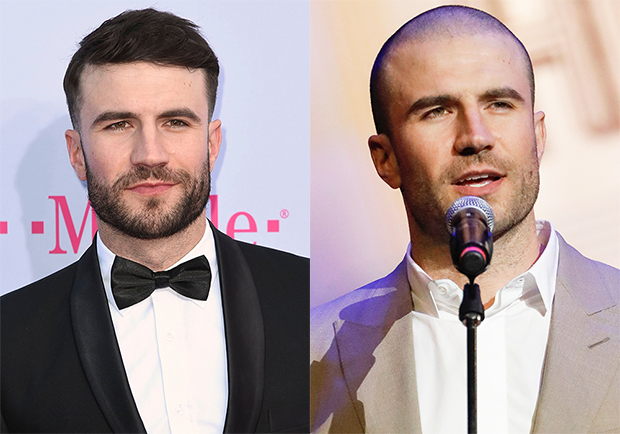 All we need is a little “Downtown’s Dead” from this newly hairless guy, and we’ll be good to go. Because it’s not the beard that matters, but the vocal chords under there!