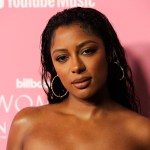 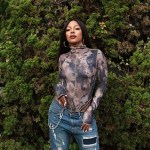 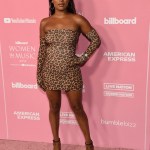 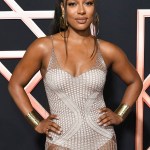 Victoria Monet’s “New Love” video is here! Watch the EXCLUSIVE premiere, and see what the singer has to say about the video’s message, her experience with heartbreak, and all she’s learned from pal Ariana Grande.

Victoria Monet, 25, has worked with some of the biggest names in music. Between sharing the stage with Ariana Grande, and penning tracks with the likes of Fifth Harmony, Chris Brown, & more, she has her A-lister circle cut out for her. Victoria is the one to watch though, in her brand-new video for “New Love.” The singer is unstoppable in the Janet Jackson inspired clip, as she throws the ultimate dance party with friends!

It’s no surprise that Victoria shows off her moves in the ultra-cool ’90s-esque music video. Dance has always been an important part of the art Victoria makes! “When I first planned to move to Los Angeles, I planning to move for dance,” the Sacramento, California native reveals. I was shy growing up, and dancing was a silent sport. It’s where I got my confidence from…singing was a big secret for me.” Once she found herself in LA, Victoria started forming relationships at lightening speed, which led to her having a recording career. Now, Victoria wants to keep incorporating dance into her work. “The performance part of artistry to so important to me,” she tells HollywoodLife EXCLUSIVELY.

Where does Victoria get all of her drive from? “It came very young. I used to tell my mom I wanted to be a triple threat. I still feel the same. My first real love for music came when I had to do a performance at school.” She also admits that Michael Jackson had a monumental influence on her growing up. “I used to watch a tape of Michael Jackson that my uncle had, and I would study him. I loved seeing the effect he had on people. I want to take people away from their normal lives and give them something to smile about,” she says.

Victoria has her own reasons to smile these days. She tells us her Life After Love Pt. 1, which she released this past February, was about the crushing breakup she went through with an ex-boyfriend, who also acted as her producer. “It was a split both musically and personally,” she admits. But now, as Victoria moves on, she is releasing the follow up to the record. “Part 2 is about the same situation but on the happier side,” she says cheerfully. She hopes fans will take away an important message from the full circle albums. “You’re still alive, you can find yourself, and it takes a lot courage and strength to do that.”

If Victoria looks familiar, you might have seen her slaying the stage while opening Ariana Grande’s Dangerous Woman tour. “Just watching her is inspiration enough for a couple lifetimes,” Victoria says of Ariana. The singer admits the “No Tears Left To Cry” singer has taught her a few things through their work together. “She’s sweet but she’s also stingy…she’s a boss. People usually don’t know how to balance the two, but she knows how to handle her business as a woman. She’s taught me how to handle certain challenges that pop up,” says Victoria. “I couldn’t ask for a better friend.”

“New Love” is the first single off Victoria’s forthcoming EP due out in September. As the songstress continues penning tracks with the hottest music stars of today, (she’s currently working with Normani Kordei!) Victoria is definitely one to keep tabs on her way to the top. Be sure to watch the full video for “New Love” above!