Kim Kardashian never half-a**es anything, even when it comes to her underwear. She showed off her jeweled thong in a super sexy new photo, where she’s pictured kneeling in a tight neon skirt! — And, you need to see this!

Kim Kardashian, 37, goes all out, all the time, even for the garments that people won’t see. — Or, in this case, her thong that you will see since she strategically pulled it out of her skirt. The KKW Beauty mogul showed off her contour singles in sexy new photo with her black jeweled thong on full display. Kim is pictured (below) kneeling down in a neon green/yellow skirt as she’s staring in her contour mirror. The Keeping Up With The Kardashians star was in at the Setai Hotel in Miami when the sultry photo was snapped.

Kim has been owning the neon trend ahead of fall, sporting bright pink and green outfits during her events and outings. The mother of three was recently down in Miami with friends and her kids getting some R&R in. She even donned a curve-hugging neon green latex dress to 2 Chainz‘s wedding, which she attended with her husband, Kanye West, 41. While in Miami, Kim also rocked a neon green long wig, which she color coordinated to match her bright-colored outfits and neon cars, one of which was a Lamborghini. — Like we said, Kim always goes all out.

The reality star and business woman most recently rocked a pink neon mini dress while at the Beverly Hills celebration of the 25th anniversary of retailer, What Goes Around Comes Around. Kim hit up the event with her former assistant, Steph Shep, and walked the red carpet, showing off her brunette bob. And, although Kim’s nude-colored spanx slipped out from under her dress, she still killed the red carpet scene. 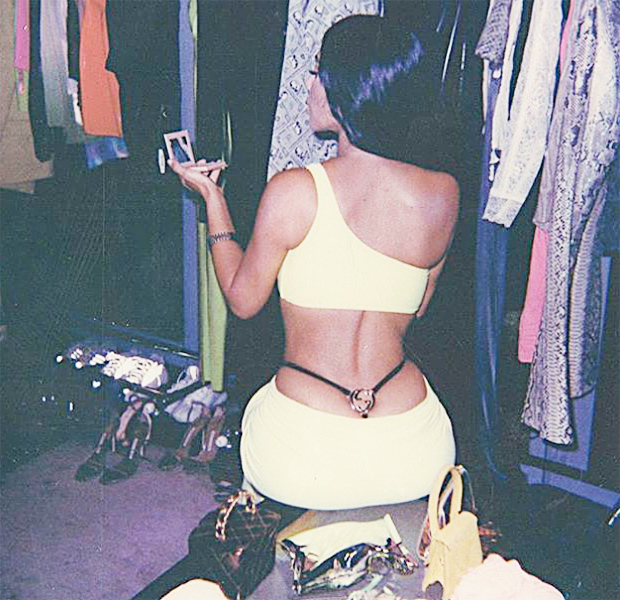 Kim Kardashian shows off her jeweled thong while kneeling in a tight neon skirt in a post on Instagram on August 21, 2018.

Kim recently caused a craze on Instagram when some fans mistook her for actress, Megan Fox, 32. Kim had fans doing a double-take after she posted a selfie with clear blue contacts on August 15.