Ian Somerhalder, 39, will always be known for his role as the charming Damon Salvatore on The Vampire Diaries, but he’s heading to Netflix for the all-new series V-Wars. The show is about vampires, but there’s an environmental twist. HollywoodLife talked EXCLUSIVELY with Ian about why he wanted to take on another vampire show. “While I have immense gratitude for Vampire Diaries and all involved, V-Wars provides a space for everything I couldn’t do on Vampire Diaries,” he told HollywoodLife during the Take Your Cat to the Vet Day campaign on behalf of Royal Canin. “We get to tackle true social issues and intertwine them into a fictional narrative that feels so real. The idea that a biological pathogen kept hidden and dormant is exposed because of rapid climate change and glacial ice melt wreaks havoc on the world is not that far-fetched, unfortunately. We have heated our planet so much, so these are issues that are right around the corner.”

Ian isn’t playing a vampire this time around. He’ll be playing the role of Dr. Luther Swann in V-Wars, which is based on Jonathan Maberry’s bestselling book. There are some pretty big differences between the characters of Damon and Dr. Swann. “First of all, he’s human,” Ian told HollywoodLife. “Damon Salvatore was such an incredible character to play for so long. Dr. Swann is a father and a very grounded character in a sense that he is beholden to the laws of physics and that of mortal man.” As for Legacies, the latest TVD spinoff premiering this fall, Ian says that he has “no plans to be on Legacies, but I do miss that Alaric!” 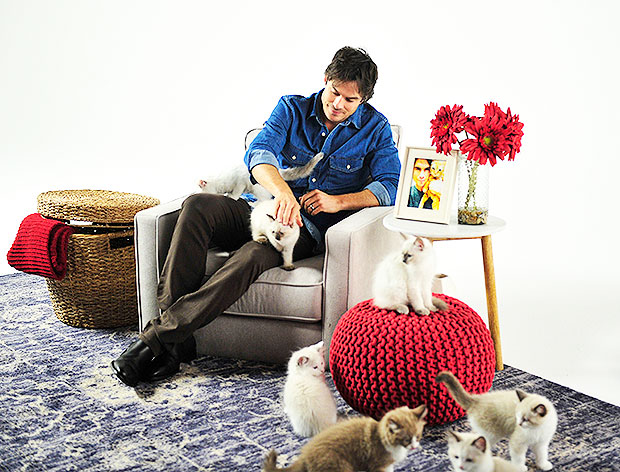 The actor talked with us for National Take Your Cat to the Vet Day on Aug. 22 in partnership with Royal Canin. Ian opened up about why this campaign is near and dear to his heart. “Royal Canin’s Take Your Cat To The Vet Day campaign is important to me due to the fact that not only do I have an incredible love for these furry creatures, but since they are such stoic and quiet creatures, they are taken to the vet substantially less than their canine brothers and sisters,” he said to HollywoodLife. “This campaign is about bringing awareness to that issue and creating real action by the pet-parenting public.”

Ian believes that “a household or family without pets, I feel, is one that misses out on pet dynamics and the fun of having furry creatures to nurture them, and remind them to be present. Pets also teach not only adults but children responsibility, compassion, and patience.”