Cardi B reportedly got mouthy on Instagram after a Nicki Minaj fan dissed her! The rapper allegedly threatened to ‘drop’ her infant daughter to engage in a fight with the fan. And, child services were reportedly called. What in the world is happening?

Cardi B, 25, reportedly had child services called on her in Atlanta after an alleged social media spat with a fan, where she allegedly threatened to “drop” her baby! Things got heated during an apparent fiery exchange between Cardi and a Nicki Minaj fan, when the Instagram user (according to the below screenshot) told Cardi and her sister Hennessy that they would “never” be on Nicki’s level. While Cardi and her sister appear to not have participated in any Nicki disses, Cardi did engage in talks to physically fight the fan. And, Cardi wasn’t messing around.

The “Bodak Yellow” rapper even offered up her location, which was at a recording studio in ATL, so her haters could “pull up” and fight. That’s when she allegedly said she’d “drop” her infant child, daughter Kulture to do the deed. Her alleged comment in reply to the Instagram user read: “F–k a @ I’m dropping my address is I’m in Atlanta in Mean studios wassup? PULL UP you claiming I’m p–y ? I;m giving you a LOCATiON any of ya in ATL? Cause im here and i drop my baby so i can fight RIGHT NOW !!!!” This was after the Instagram user wrote: “Keeping posing and deleting your and ya sister will never be directed to Nicki. Y’all know where y’yall stand. I like you a lot but if your not gon @ her the stay shut babe,” tagging Cardi and Hennessy in the comment.

Following the social media feud, fans in the comments allegedly claimed they had phoned child services in Atlanta on the new mother. Cardi has yet to comment on the reported situation, and it’s unclear if child services were called or not. And, who knows, maybe Cardi really meant that she was dropping her baby off somewhere, and just forgot the words. It’s evident that her apparent comment has a few typos, so anything is possible. 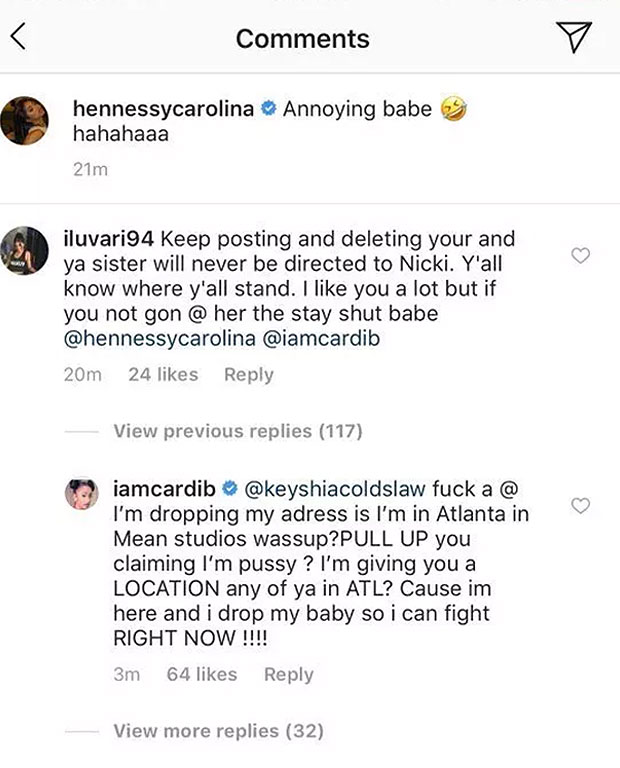 Cardi has documented online how much she loves being a new mother and how she’s learning so much from the experience. Not to mention, we think she’s a great mom! The rapper gave birth to her first child with Migos member, and husband Offset, 26, on July 10. While Cardi hasn’t addressed any of the above, she has been active on social media, where she gushed over motherhood on August 13. “When my baby girl locks eyes with me the strength and emotions i get it’s unexplainable. I love this baby so much and I know she loves me too,” Cardi wrote in a note on her Instagram story. She added, “Soo deep in love I can’t find the words,” alongside a baby and pink bow emojis.

While both Cardi B and and Nicki have touched upon their past situation the rappers have cleared the air that there’s no real beef. However, fans love to stir the pot. Not to mention, this apparent feud happened in light of the release of Nicki’s new Queen album.