While it’s too early to tell whether or not Canon Curry will be a stud on the basketball court like his dad, we can already tell he’s going to be the spitting image of Stephen Curry, 30. Yes, this little angel is only one month old, but the resemblance is real already! Ayesha Curry, 29, finally posted a full-on photo of her baby boy’s face after a weeks of sharing his head and his profile. “Stephen has some competition in my world because this little man stole my heart and then some,” she wrote. And we don’t blame her! He’s so stinking cute — although we can’t say we’re surprised. His older sisters Riley, 6, and Ryan, 3, have both been melting our hearts for years. But what is surprising was the strength of Steph’s genes. Canon is his his mini-me, so we can only imagine how striking these similarities will become as he grows.

Fans freaked over this in the Instagram comments! Anyone who wasn’t raving about Canon and his sweet smile were going on and on about him being his dad’s twin. “The baby looks exactly like his dad Stephen !!!!!!” one person wrote. “His eyes are so beautiful.” Another fan left a comment that read, “He looks just like his daddy. They all do GOD BLESS.” But like, it wouldn’t be a bad thing if he looked like his momma — just saying! Steph’s wife is beautiful, whether she’s rocking a beautiful baby bump or posing as the face of COVERGIRL. In fact, even though it’s a pretty common consensus that Riley and her dad look a lot alike, Ryan is the only one who takes after her mom. And she’s just as adorable as her sweet sibs.

So when are they going to bless us with a family photo? We need to see the whole Curry fam lined up side by side so we can compare, although we don’t know if we’d be able to handle the cuteness, TBH. 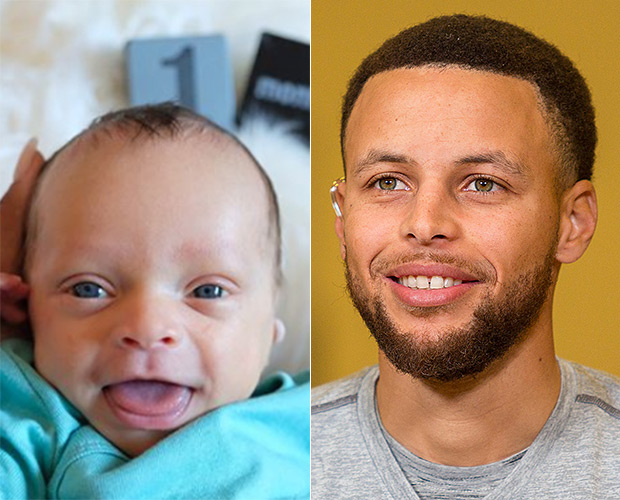 All we can say is, Steph has proven once again that he’s just as great at making cute babies as he is at winning NBA championship rings — he does have three of each, after all!