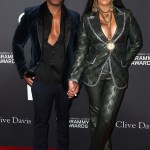 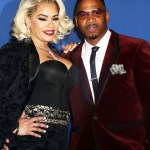 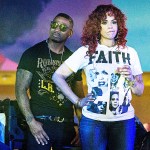 Stevie J isn’t letting any baby mama drama get in the way of his wedded bliss to Faith Evans. The pair just dropped a sexy duet and video, and we’ve got it right here.

Stevie J, 46, and new wife Faith Evans, 45,  are already making beautiful music together…literally! The pair dropped a new duet complete with a video for their song “A Minute,” late on July 26. They can be seen pillow fighting in bed, making breakfast together, but they also get down and dirty. Stevie is seen kissing Faith’s boobs as she wears a black bra. Stevie sings, “I’ve crossed the line so many times but through it all you’ve always been there for me.” Could he be ‘fessing up to his alleged transgressions with another woman?

She counters back, “Lately, I’ve been thinking you could be my baby. Everybody thinking we’re both crazy. You’ve crossed the line. So many times. but you’ve always been there for me.” The duet comes as a woman called Misha Perry accuses the Love & Hip-Hop: Atlanta producer of being the father of her unborn child, which she EXCLUSIVELY revealed in an interview with HollywoodLife. All that drama seemed to be far from the newlyweds’ minds in their hot new video, which kicks off with them flirting and referring to their decades’ long friendship, which recently grew into love. Faith tells her new husband, “I kinda like how it is.” But he replies, “Nah, I’m not feeling that.” When she says that he’s “not really ready,” he says he was “born ready.”

Faith and Stevie stunned the showbiz world when they had a quickie Las Vegas wedding on July 17. But the couple’s fans seem to be totally into their romance and their new music project. The comments on YouTube so far seem to be largely positive. One fan wrote on YouTube, “Yep this real Stevie ain’t never looked so in love go Faith!!!!” Another person added, “Alright Nahhh.. Mr. & Mrs. Jordan .. Bring that ’90s steamy n shower sexy back…” Meanwhile yet another fan gushed, “The video is dope love the song never seen Stevie J this happy I’m proud of them both.” The couple teased the sexy shoot a few days before with behind-the scenes clips on Instagram but they premiered the full video on YouTube on July 26.