There’s a reason little black dresses get their own acronym. Black always looks great, and you can really never go wrong with a mini dress. But black isn’t always the most exciting color – which is why we suggest trying out a hue that’s a bit unexpected. Orange doesn’t get enough love in our wardrobes, but it’s a sure-fire way to stand out in a crowd. Just check out celebs like Selena Gomez, Khloe Kardashian, and Olivia Culpo who have all rocked citrus shades. Or, you know, just watch the new season of Orange Is The New Black in your black ensemble and call it a day.

Earlier this week, Emily Ratajkowski turned heads in New York City when she stepped out in a blood orange scoop neck mini-dress. While this look would have been exceptionally understated had it come in black, we’re digging the bold take on a tank dress. She accessorized her outfit with a chainlink purse and beige sneakers.

Wearing orange can also make a social impact. Orange has become the defining color of the gun violence prevention movement, and people everywhere have donned the hue to fight for stricter gun reform laws. Halsey did just that earlier this year when she wore an orange bandeau and skirt set to the Governor’s Ball. She explained the reasoning behind her outfit in an Instagram post, captioned: “orange u happy 2 see my smile ????? (I’m wearing orange to allll of gov ball weekend to protest gun violence! If you’re here join in!)” TBH, this is probably the best possible reason to add the warm color to your closet. 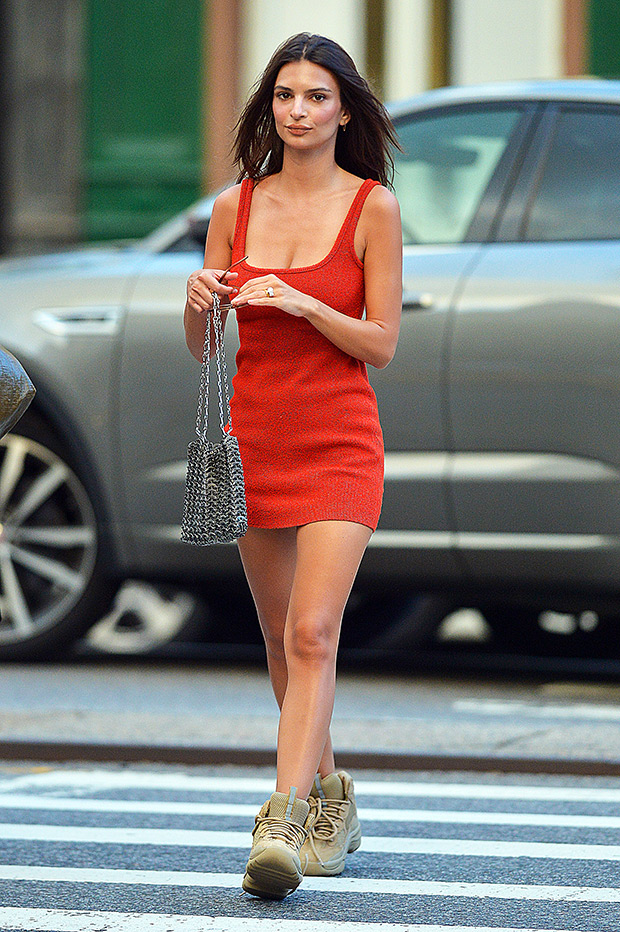 But we get it – celebrities often wear expensive clothes and these frocks might seem way out of your price point. Thankfully near-billionaire Kylie Jenner loves an occasional bargain. The lip-kit mogul attended the PrettyLittleThing launch party in 2016 while wearing the brand’s Lauriell Bright Orange Wrap Front Crepe Midi Dress. The price tag? A reasonable $35! Yeah, that definitely sold out immediately, but it was eventually restocked. The site also offers tons of other affordable orange options, so it’s NBD if you can’t get the exact one the reality star wore. Check out our gallery above to see more celebrities making orange a thing with chic dresses!