Carly Craig is the co-creator and star of the new female ensemble comedy series Sideswiped, which is partially based on Carly’s dating experiences and focuses on three women — characters played by Carly, Rosanna Arquette, and Chelsea Frei — who try to navigate the digital dating scene. Carly’s character, Olivia, a workaholic and still single at 35, decides to date all 252 of her Tinder matches. Yes, really.

HollywoodLife talked EXCLUSIVELY with Carly about the highly-anticipated new YouTube Premium show, and she revealed how the show led to a relationship after 12 years. “I met my boyfriend on Tinder doing research for the show,” Carly told HollywoodLife. “A group of my friends forced me to get on Tinder because I hadn’t been in a relationship for 12 years. They said, ‘You need to get on Tinder. You haven’t been doing online dating.’ I was writing about this show and doing research at the same time. We go on Tinder and probably swiped on everybody in Los Angeles. We were not even looking, just swiping. I had 252 matches that night, and 400 the next day. So I was going through them all, and one of them had a really cute message. And I said, ‘Oh, I actually want to write this guy back. He’s really cute.’ So I wrote him back, and he’s been my boyfriend for over 2 years now.”

The show is based on Carly’s “real experiences on real dates,” but it’s really about the female trio at the center of the series. “This show is really about these three women who are figuring out who they are,” Carly continued. “It’s about falling in love with yourself, more than it is finding the guy. Dating is important and helps you discover who you are. All those bad dates helped me go, ‘This is what I don’t like. This is what I don’t need. I can do this on my own.’ It made it so when the right guy came along I was really ready for it because I knew myself so well. That’s what the show is about. It’s not about the happily ever after with a guy, it’s about [the happily ever after] with yourself.”

Rosanna plays Mary, Olivia’s mom who has recently been widowed. Mary is now dating alongside Olivia. Meanwhile, Olivia’s sister, Jayne, is 25 years old, married to a doctor, and has a baby. “Throughout the show, you kind of see that Jayne tried to live life by the rules, but now she’s not as happy as she comes off in the beginning,” Carly teased. “You kind of see her living vicariously through my character and starting to sort of talk to Olivia’s Tinder dates on her phone.”

Online dating can be extremely intimidating, but Carly has some key tips on how to embrace the swiping. “I would say to just be open-minded,” Carly said. “The thing about Tinder is you don’t have all those questions. The thing is to just do it. I put my picture up with no bio. I did it as simple as possible. I just wanted to dip my toes in. It was a matter of not being picky.”

Related: Notorious B.I.G.’s Death: What Happen, How Old Was He, & The Tupac Connection 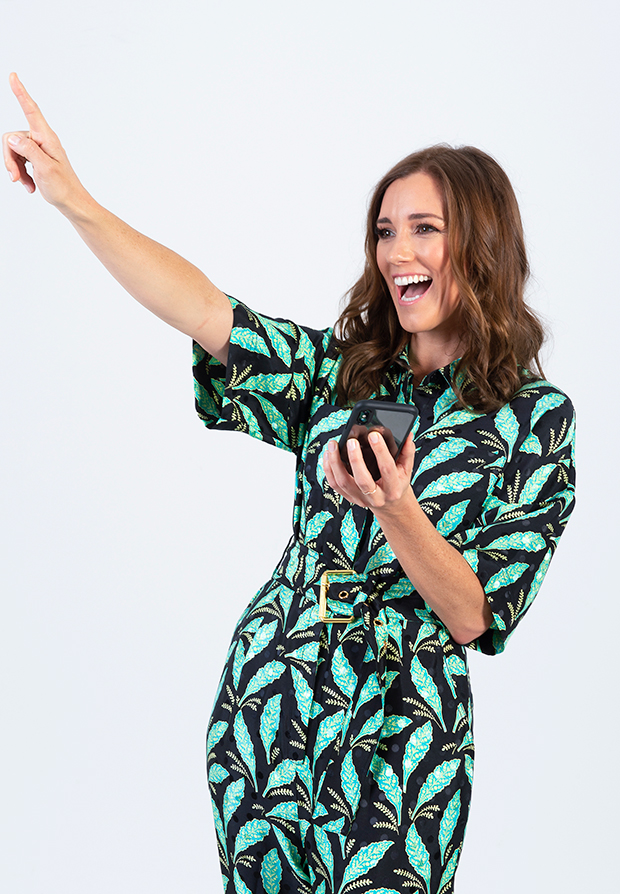