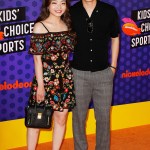 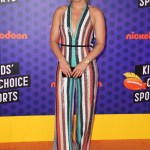 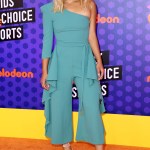 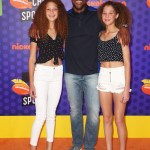 He’s not a regular dad, he’s a cool dad! Michael Strahan invited his daughters to be by his side at the 2018 Kid’s Choice Sports Awards, and we can’t believe how grown up they look!

Michael Strahan, 46, earned some cool points with his daughters on July 19 when he took them for a night out to the 2018 Kid’s Choice Sports Awards. The 13-year-old twin sisters, Isabella and Sophia, looked thrilled to be at dad’s side for the award show in Los Angeles and were all smiles in pictures. The show, hosted by NBA star Chris Paul, also saw attendance from stars like Chloe Kim, Michael Phelps, and even Ciara.

On the ‘orange’ carpet,’ Isabella and Sophia wore matching outfits, each choosing to don navy crop tops paired white denim bottoms. Twinning for real! Dad kept it ultra casual in jeans and a collared shirt. Their appearance at the awards show was a rare one for Michael’s children, who usually keep a low profile. The former New York Giants player shares his twins with ex-wife Jean Muggli, and tries to give them as much of a normal life as possible, including a regular education. He told People, “During their school year I get on a plane, and I fly to see my kids.” “Whenever they get a break, they come to New York,” he added. It looks like this time around, Isabella and Sophia were the ones flying out to meet dad. Not bad for a school night!

Even after his football career, Michael has kept an impressive resume. GMA host, NFL Hall of Famer, Emmy winner, author, you name it. The star can also now add model to the list. Just this week, he was seen shooting the latest collection for his MSX and Collection by Michael Strahan clothing line. Perhaps, Michael has been keeping busy in an effort to combat rumors that he is incredibly jealous of fellow athlete Alex Rodriguez. According to RadarOnline, Strahan has been feeling threatened that the ex-Yankee player has been stealing his spotlight!

From the look of his beaming smile here with his family, we don’t think Michael seems to be jealous of much at all.