T.I. is still in the doghouse with estranged wife Tiny Harris after he was caught on video slapping Asia’h Epperson on the butt and cozying up to her backstage during an Indiana tour stop on June 17. It looks like he could be trying to sweet talk his way back into his wife’s life and make things right with her. She put out a warning that actions need to speak as loud as words, sending out a very telling message on July 6. She took to her Instagram stories and posted the saying “I’m in my ‘You have to prove everything you say to me’ phase of life.” The 42-year-old hasn’t been shy about posting cryptic messages on her social media that seem directly pointed Tip’s way.

We told you EXCLUSIVELY that Tip was begging Tiny to spend the Fourth of July with him, but that she wasn’t interested. Sure enough she and their two-year-old daughter Heiress spent the holiday together, as she posted an adorable IG pic of the pair twinning out in matching blue camouflage outfits and blue wraps in their hair. “On our Mommy & Me kinda 4th of July” the Xscape singer. Surprisingly T.I. crept on her Instagram and liked the photo! Tiny’s going to be around plenty more girl power as Xscape plays the Essence Fest in New Orleans in July 7.

Tiny made the shocking revelation recently that she once had Tip followed by a private investigator when she suspected he might be cheating on her. She appeared on BFF Kandi Burruss‘ new Bravo show Kandi Koated Nights, which premiered on July 1. Tiny revealed, “I definitely would recommend it. It is expensive, though. But it worked,” when it came to having a P.I. tail T.I. 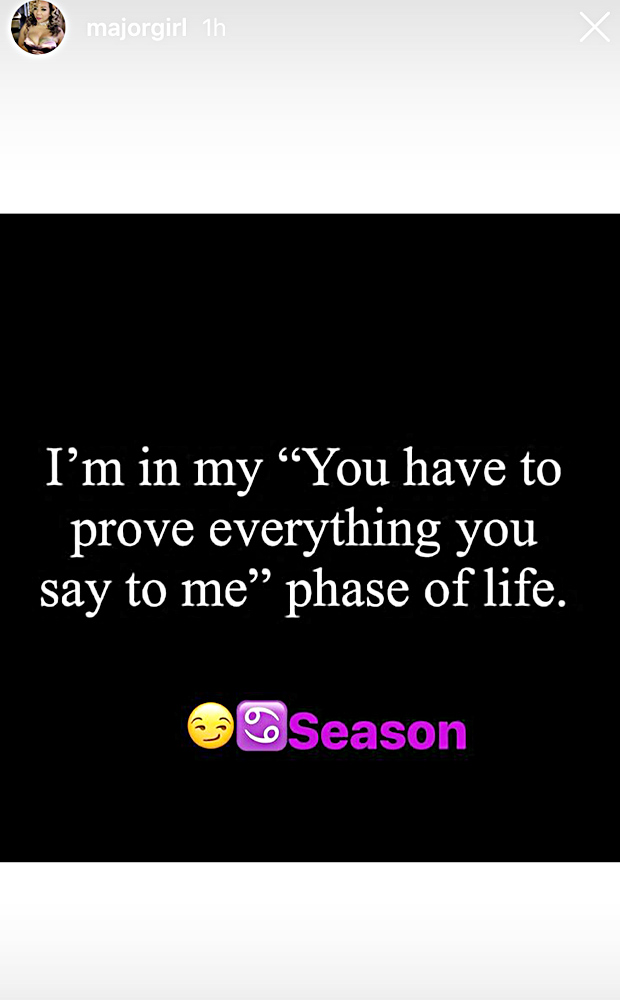 She didn’t explain when she did it, but it would presumably either have been recently after Tip’s flirtation with Asia’h, 29, or in the spring of 2017 when he was allegedly having an affair with Bernice Burgos, 38. Tiny ended up forgiving him for the latter transgression and they seemed to get their relationship back on track later that summer. But she is still super pissed about what he did recently with Asia’h.