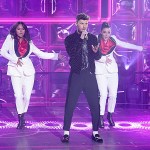 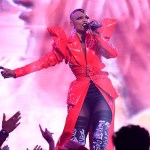 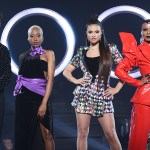 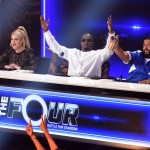 Sharaya J is still in the running to win ‘The Four’ season 2, and she’s got a voice that demands to be heard. She’s also currently battling cancer. Here’s what you need to know about Sharaya.

1. Sharaya J is battling Stage 2 breast cancer. “I’m chasing the dream and fighting for my life,” the 34-year-old said on The Four, which airs Thursdays on FOX. “I am a survivor and a fighter, and I will be sitting in one of those chairs until the end.” After the first week, she flew back to Atlanta to get chemotherapy. Sharaya will not be taking part in the June 28 episode group number because of her doctor’s orders, according to our sister site Variety. Timbaland will be performing as Sharaya’s fill-in.

2. She’s worked with Diddy before! During her early career in the dance industry, she worked with The Four judge, Rihanna, Ciara, and Alicia Keys, according to her official website bio. This led her to a lasting career in music. Missy Elliott has since become her mentor.

3. One of her own competitors wants her to win! James Graham is also still in the running to win the second season of The Four, but he’s rooting for Sharaya take home the title. “I want her to win,” he told ET. “I think she’s incredible. Regardless of that, she’s so talented. I don’t see anyone coming in and beating her, at all.”

4. Music has always been a part of her life. She grew up around music. Her father was a member of the ’90s hip hop group Double XX Posse. A great voice clearly runs in the family! She also started her own company called BANJI Entertainment.

5. She was a brand ambassador for one incredible fashion designer! She teamed up with Alexander Wang and starred in his T by Alexander Wang campaign.