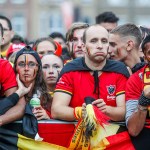 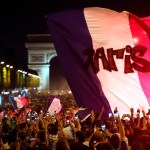 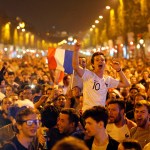 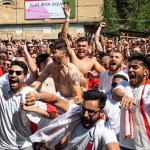 Bye, Felicia. Germany just got bounced out of the World Cup, losing to South Korea in a massive upset! While Germany’s supporters were crushed, other soccer fans reveled in the loss!

Yes, that’s right. Germany, the team that won the 2014 World Cup, have been knocked out of the 2018 tournament. They didn’t even get out of the preliminary Group Stage, thanks to a 2-0 loss to South Korea on June 27. As the game was winding down, it seemed as if Germany was going to advance, but goals by Kim Young-gwon, 28, and Son Heung-min, 25, in stoppage time doomed the defending champs. This second loss, along with Sweden defeating Mexico, ensured Germany’s elimination, denying them the chance to defend their title.

The result left some fans confused and others joyous. “Good riddance Germany,” one fan tweeted. “MEXICO HOW YOU LOSE TO SWEDEN. AND GERMANY… HOW THE [f*ck] DO YOU LOSE TO KOREA?????” another added. “germany is out thank god” “The World Cup curse of champions continues latest casualty #GERMANY” “Wtf Germany, just wtf?!” Another fan – @MarcoProfumo – made a callback to World War II, saying that “Germany cannot win in Russia, it’s history.”

Germany didn’t just get eliminated – they finished dead last in Group F. Along with this loss to South Korea, Germany fell 1-0 to Mexico. Their sole victory in the 2018 World Cup came when they went 2-1 over Sweden. Yet, it was the Blågult who won the group, thanks to their surprising 3-0 victory over Mexico (Mexico would also advance despite the loss, having sunk Germany and South Korea.)

Germany are out… #WorldCup pic.twitter.com/OX4LEJUdUy

The “curse of the champions” might be a real thing, as Germany is now the fourth defending champion in the last five tournaments to be eliminated in the group stage, according to Yahoo! Sports. France got bounced in 2002, Italy said “Ciao” in 2010 and Spain went “Adios” in 2014. This is the first time Germany was eliminated in the first round since 1938 (though EPSN says that this was the first time Germany was eliminated from the group stage. Semantics.)

Now, Mexico and Sweden join Uruguay, Russia, Spain, Portugal, France, Denmark, Croatia and Argentina in the Knockout stages of the world cup. The remaining spots are still up for grabs, but England and Belgium have ensured their advancement. Brazil, Switzerland, and Serbia will battle for the spots in Group E, while Japan, Senegal and Colombia will fight for Group H.