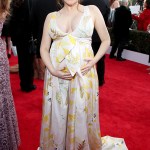 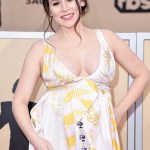 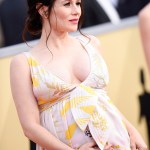 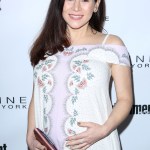 Congrats to Yael Stone and Jack Manning Bancroft! The Orange Is The New Black star has given birth and welcomed a baby girl with her boyfriend, Us Weekly reports. “On May 30th Pemau Stone Bancroft was born to Yael Stone and Jack Manning Bancroft,” a rep for the Australian actress told the magazine on June 14. “Her mum and dad are very tired and very much in love. She was named after her great great great grandmother who provides a powerful link to the past, the Bancroft’s oldest link to the Djanbun clan of the Bunjalung nation.”

Stone, who plays Lorna Morello on the Netflix show, and Bancroft, the CEO of global mentoring organization AIME, began dating in 2017. She announced that they were expecting her first child in November.
The actress has also been documenting her pregnancy on social media. On May 18, she showed off her baby bump in a rolled up T-shirt that said “Phenomenal Woman” on it. “Moving into the final stages of this incredible journey with respect and gratitude for the women who have come before me. #phenomenalwoman,” she wrote on May 18. “Photo by the one and only @alexvaughanphoto.”

Moving into the final stages of this incredible journey with respect and gratitude for the women who have come before me. #phenomenalwoman Photo by the one and only @alexvaughanphoto

Stone also flaunted her bump at the Screen Actors Guild Awards in January. She held her tummy on the red carpet while wearing a white and yellow empire waist dress. During the event, she also took a photo with costar Taylor Schilling who placed a hand on her bump. Stone shared the image on Instagram, and captioned it, “The Fancy Preggo finds a pal to also hold the belly and confirm ‘Yes, it’s true, it’s a baby.’”

Congrats again to the happy couple on their little bundle of joy!