What you see is what you get when it comes to Steve Gold. — The 33-year-old successful luxury broker truly is as intelligent, charismatic and genuine as he appears on Bravo’s Million Dollar Listing New York. And, to answer all of you who asked… Yes, Steve Gold is actually that good-looking in person. But, there’s so much more to his story than meets the eye, which is why I was so intrigued to speak with him and ultimately compelled to tell his story.

Gold is a fascinating person to say the least. Born and raised in Connecticut, he admitted that he used to be somewhat of an introvert in his suburban hometown. Nonetheless, that didn’t take away from his constant hunger to succeed and his ruthless work ethic. After conquering the modeling world at a young age, Gold moved on from fashion to enter the cutthroat business of luxury real estate, which he’s been dominating ever since.

He joins Fredrik Eklund and Ryan Serhant, on Bravo’s Million Dollar Listing New York for his second consecutive season, to show the world what it takes to sell luxury properties throughout New York City. (MDLNY‘s seventh season premieres on June 11, at 10 PM ET.) While Gold was getting his feet wet in the world of reality television during the show’s sixth season (2017), he admits that he feels more “comfortable” this season, despite always being his humble self in front of the cameras.

The seventh season picks up with Fredrik and his husband, Derek, along with their new babies (twins). Ryan has now garnered a big team in Brooklyn. And, Steve has his own team working for him. You’ll notice that he’s also sporting much shorter hair this season — A decision his rebellious side made because he doesn’t always like to play by the rules. And, you can certainly expect the drama this season, as Gold reflects on a visit from his ex-girlfriend this season and much more! — Get to know Steve Gold a bit better:

What separates last season from season 7 for you, personally?

I think having one season under my belt, you kind of know what’s coming. I feel like, for me, growing through the show it forces you to grow as a person. I wasn’t naturally an extrovert, or somebody that should be on reality TV. So, for me, having popped my cherry (so to speak), last season, now it enabled me to dive in more. This season I explored some of my past personal life, emotional life, there’s a lot of great business in there too. There’s an epic, and really monumental shift in my career that you’ll see this season that came out of left field and I had to deal with it… What happened really never happened in the history of New York in real estate, and it certainly has never been seen on a real estate show. It’s a lot of fun, a lot of drama, some fighting; Me and Ryan kind of got into it this season…

Do you think you were more tamed in season 6 since it was your first?

I think I was me. I was comfortable with being me, my real personality is what you see. Everyone says, ‘You’re like an onion.. It takes a while for you to open up, to get to know you.’ I am the same way with the audience as I am with anyone who knows me. I don’t open up super quickly, and naturally I’m not going to be that way at first on TV. But, it was really authentic to me in the whole process. For me, the only way I can do this (show) is to be authentic and open up as slowly or as quickly as I’m comfortable. I definitely feel more comfortable this season with everything and I think it’s really going to show.

You see one of my exes, one that I had a very serious relationship with. I have real history with her, years, we lived together. The reconnection was based out of real estate, then we start talking. The past is the past, but we have a lot of history together, and we remember different things and we explore that… tune in. 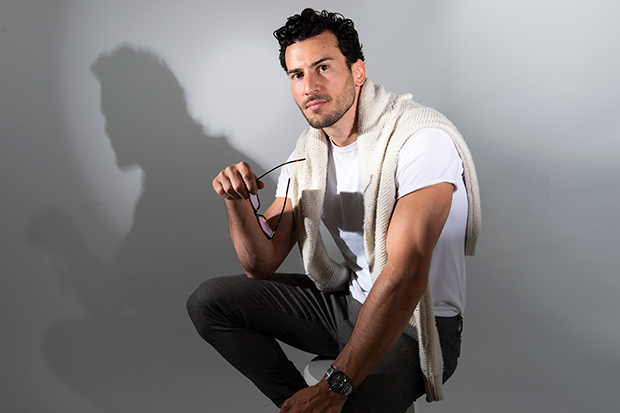 I know you’re a competitive person … How has it been to work with Fredrik and Ryan on the show?

The way I view competition… I’m an athlete, I’ve been an athlete all my life. So, you can be the most competitive person on the ice, on the court, on the field, wherever you’re competing… At the end of the game, you shake hands; you could have had a fist fight with someone during the game, after the match or whatever, or listing, but, you move on. We’re all busy. Of course I want to win, I always want to win, that’s just the mentality I have. But for me with the other guys, yeah, we’re competitive, but I’m friends with Fredrick, and Ryan, he’s Ryan… I like him.

What’re the pros and cons of putting your business on TV?

I think five or six years ago when I wasn’t where I am right now, or even last season in my career, I would be hesitant. I have a really strong business, and a lot of it is high profile people from celebrities to titans of industry and I was always like, ‘I’m not the star, they’re the star in whatever field they’re in, wether it’s pop culture or finance. I’m working for you.’ Back in the day, I wanted it to stay that way, that person who helps them. So I didn’t feel like me being on television would sit well with them or with anyone really. I took my business super seriously, I was this kind of hyper-focused guy, numbers-oriented; I have a finance degree with a dual marketing major and it was all about performing for them. Then, things chance, everything changes, reality TV has changes. And, you see these properties that are filmed so beautifully, it’s an amazing tool for marketing as well as myself. So, I changed my own perception on reality TV, and I saw how different clients reacted to certain people on reality TV, I was like, ‘Maybe this is something I should and can explore, and maybe it own’t be a detriment to my business. In fact, it’s a positive.

Tune into the season premiere of Million Dollar Listing: New York on Monday, June 11 at 10 PM ET on Bravo!