As if fans needed another reason to love Dwayne Johnson, the star posted THE most amazing photo of himself with Lauren Hashian. In the pic, Lauren’s breastfeeding their baby, and you’ll never believe what Dwayne’s doing to support her!

It’s official — Dwayne “The Rock” Johnson, 46, is the man of EVERY woman’s dreams! Taking to Instagram on June 10, the actor shared a precious photo of his longtime girlfriend and two-time baby mama, Lauren Hashian, 33, breastfeeding their 1-month-old daughter Tiana. And while that’s completely beautiful in itself, what fans could not get over is what Dwayne is doing in the pic. Kneeling down before his ladylove, Dwayne is happily feeding Lauren as she feeds their newborn — and he has the biggest and cutest smile on his face. Cue the swoons!

“I’ll handle this business 😉💪🏾,” Dwayne captioned the adorable image. “Mama @laurenhashianofficial has her hands full nursing/feeding Baby Tia, so I’m feedin’ mama her dinner. My pleasure.” The star added, “So much respect to her and all mamas out there holding it down and running things. Just landed and good to get all my girl’s settled in. Now, I gotta go satisfy my own appetite.. Iron Paradise, here I come.” Ladies come on, does it get any more chivalrous than that?

Dwayne’s fans couldn’t help gushing over the pic, with one Twitter user gaining inspiration for her own relationship. “Watching @TheRock feed his lady while she nursed their baby IS EVERYTHING I NEEDED TO SEE,” Lauren G. tweeted. “Breastfeeding requires so much partner support. Sean.. you going to get me a glass of water is no longer enough. FEED ME TOO.!” Another fan wrote, “Couple goals,” with a heart-eyed emoji. A twitter user named Marta gushed, “Find yourself a man like @TheRock,” while another wrote, “#ParentingGoals ft. @TheRock What a GENTLEMAN.” We could not agree more. 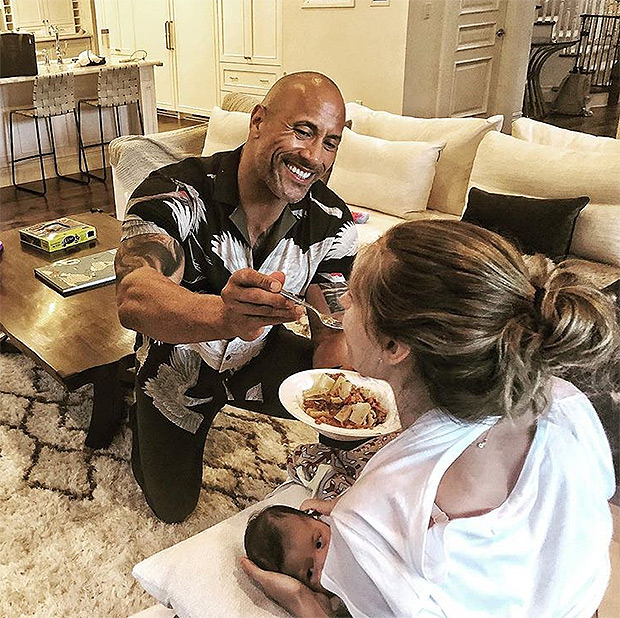 Watching @TheRock feed his lady while she nursed their baby IS EVERYTHING I NEEDED TO SEE. Breastfeeding requires so much partner support. Sean.. you going to get me a glass of water is no longer enough. FEED ME TOO.!

Lauren gave birth to baby Tia in April, making Dwayne a three-time father. Lauren and the star are also the proud parents of 2-year-old Jasmine, while Dwayne has a 16-year-old daughter, Simone, whom he shares with his ex-wife Dany Garcia. At the time of Tia’s birth, Dwayne wrote on Instagram, “Blessed and proud to bring another strong girl into this world.” Aw!